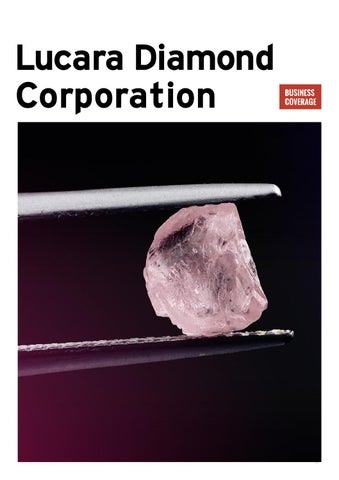 ucara Diamond Corporation is a new diamond producer with the aim of building a leading African-focused diamond production and development company. Its two key assets are the Karowe Mine in Botswana and the Mothae project in Lesotho. Though in their infancy, the 100% owned Karowe Mine is a newly constructed state-of-the-art mine which was fully commissioned in 2012 and is boasting fantastic success having completed its first two years in operation. The 75% owned Mothae project has completed the trial mining stage and results will determine whether investing further in the project is worthwhile. With Karowe Mine consistently producing large, Type IIA stones, Lucara Diamond Corporation is set to boast a very lucrative future.

Located in north-central Botswana, part of the Orapa/Letlhakane Kimberlite district, Karowe Mine is based in one of the worldâ&amp;#x20AC;&amp;#x2122;s most fruitful diamond producing areas. Developed as part of the organisationâ&amp;#x20AC;&amp;#x2122;s AK6 Project, the Kimberlite at the Karowe Mine comprises a single, tri-lobate Kimberlite pipe. Drilling has shown that the Kimberlite bulges to a maximum area of 7ha at a depth of 120m. AK6 is a roughly north-south elongate kimberlite body with a near surface expression of 3.3ha and a maximum area of approximately 7ha at 120m below surface. The body comprises three geologically distinct, coalescing pipes that taper with depth. These

pipes are referred to as the North Lobe, Centre Lobe, and South Lobe. The nature of the kimberlite differs between each lobe, with distinctions apparent in the textural characteristics, relative proportion of internal countryrock dilution, and degree or extent of weathering.

From the beginning, Lucara Diamonds built a strong team at Karowe Mine, paying careful attention to all areas of the business. From operations, control and environmental systems to sorting and sales, Karowe Mine addresses the needs of the company and community seriously. Every single employee at Karowe Mine is a Botswana citizen and Lucara Diamonds go above and beyond to ensure local legislation is adhered to and that they utilise the experience and

The 2014 tender concluded Lucara’s exceptional stone tenders for the year, in which 50 diamonds were sold for $135.6-million, at an average diamond

advancement of experience gained in Canada. At the end of 2014, Karowe Mine’s performance was in line with forecast for the year in terms of ore and waste mined and carats recovered. Karowe recovered 815 special stones (+10.8 carats; 2013 recovery of 732 specials) during the year. This included 27 stones greater than 100 carats (2013: 17 stones) and 4 stones over 200 carats (2013: 4 stones). The plant optimisation programme is advancing to plan and the plant is expected be commissioned during Q2 2015 within the $55 million forecast cost.

The company’s strong earnings have resulted in a return on capital employed (‘ROCE’) of 63% during last year, an increase of 37% compared to 2013. This exceptional upsurge follows the increase in sales from the outstanding stone tender and Lucara Diamond’s operating and capital cost discipline.

In addition, Lacara Diamond saw sales totalling 412,136 carats for gross proceeds of $265.5 million at an average price of $644 per carat during 2014. The increase in revenues of 47% or $85.0 million compared to the prior year was due to higher prices received for the Karowe diamonds and a larger number of carats being sold in the large exceptional stones tenders, which contributed $135.6 million to revenues. - About Bonas Established in London during the great South African diamond rush of the 1870â&amp;#x20AC;&amp;#x2122;s, Bonas is the oldest and most established Diamond Broking and Consulting firm in the world and operates in three distinct Business Areas: De Beers Relationship Management, where we support our clientsâ&amp;#x20AC;&amp;#x2122; relationships with the sales &amp; marketing arms of the De Beers Group of Companies; Value Chain Consulting, using our experience and exceptional market knowledge to deliver value on a wide array of industry related projects to clients, including diamantaires, retailers, brands, governments and bankers; Diamond Sales, leveraging our modern infrastructure, in-house systems, processes and enormous placing power to provide an easy route to market and incomparable visibility to both buyers and sellers of rough &amp; polished.

www.bonasgroup.com ANTWERP I DUBAI I GABORONE I HONG KONG I JOHANNESBURG I LONDON I MUMBAI I NEW YORK I SURAT I TEL AVIV

The future is bright

Lucara Diamonds recognise Karowe Mine as one of the best productions in the world, particularly considering the quality of the diamonds that the

mine is producing. Karowe Mine is Lucara Diamond’s first producing mine and set in one of Botswana’s most prolific diamond producing areas. To date, the mine is delivering 100% to expectation and producing truly exceptional diamonds, of those Karowe Mine has extracted a 9.6ct blue stone that sold for around $4.5 million. Following that, a 239ct stone, which is said to be the largest diamond recovered in the area for 42 years.

This ongoing recurrence of large stones highlights that the resource has so much to offer. The ongoing success and strong revenues generated from Karowe mine therefore allow Lucara Diamonds to look at other opportunities that they may not have been able to invest in previously. With results that shine like the unearthed stones they’re extracting, the future looks bright for Lucara Diamonds Corporation and the Karowe Mine, Botswana.

WE MOVE DIAMONDS, BULLION AND HEAVEN &amp; EARTH FOR OUR CLIENTS From overnight secured delivery of precious cargo to comprehensive 3rd party logistic services, Malca-Amit’s commitment to an unsurpassed level of excellence in customer service, delivers absolute peace of mind while your precious cargo is in transit. With offices and agents in 31 countries, along with a comprehensive international network of partners and affiliates, Malca-Amit constantly and consistently exceeds expectations. For more information visit www.malcaamit.com Malca-Amit Botswana Tel: +267 3188393 Mobile: +267 71328666 Email: Brett.nortje@malca-amit.co.bw / Sharon.nortje@malca-amit.co.bw