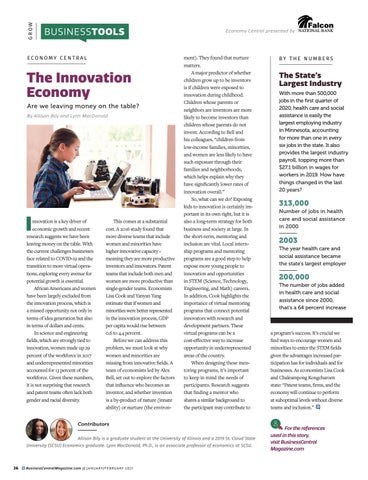 The Innovation Economy Are we leaving money on the table? By Allison Bily and Lynn MacDonald

nnovation is a key driver of economic growth and recent research suggests we have been leaving money on the table. With the current challenges businesses face related to COVID-19 and the transition to more virtual operations, exploring every avenue for potential growth is essential. African Americans and women have been largely excluded from the innovation process, which is a missed opportunity not only in terms of idea generation but also in terms of dollars and cents. In science and engineering fields, which are strongly tied to innovation, women made up 29 percent of the workforce in 2017 and underrepresented minorities accounted for 13 percent of the workforce. Given these numbers, it is not surprising that research and patent teams often lack both gender and racial diversity.

This comes at a substantial cost. A 2016 study found that more diverse teams that include women and minorities have higher innovative capacity meaning they are more productive inventors and innovators. Patent teams that include both men and women are more productive than single-gender teams. Economists Lisa Cook and Yanyan Yang estimate that if women and minorities were better represented in the innovation process, GDP per capita would rise between 0.6 to 4.4 percent. Before we can address this problem, we must look at why women and minorities are missing from innovative fields. A team of economists led by Alex Bell, set out to explore the factors that influence who becomes an inventor, and whether invention is a by-product of nature (innate ability) or nurture (the environ-

ment). They found that nurture matters. A major predictor of whether children grow up to be inventors is if children were exposed to innovation during childhood. Children whose parents or neighbors are inventors are more likely to become inventors than children whose parents do not invent. According to Bell and his colleagues, “children from low-income families, minorities, and women are less likely to have such exposure through their families and neighborhoods, which helps explain why they have significantly lower rates of innovation overall.” So, what can we do? Exposing kids to innovation is certainly important in its own right, but it is also a long-term strategy for both business and society at large. In the short-term, mentoring and inclusion are vital. Local internship programs and mentoring programs are a good step to help expose more young people to innovation and opportunities in STEM (Science, Technology, Engineering, and Math) careers. In addition, Cook highlights the importance of virtual mentoring programs that connect potential innovators with research and development partners. These virtual programs can be a cost-effective way to increase opportunity in underrepresented areas of the country. When designing these mentoring programs, it’s important to keep in mind the needs of participants. Research suggests that finding a mentor who shares a similar background to the participant may contribute to

Contributors ________ Allison Bily is a graduate student at the University of Illinois and a 2019 St. Cloud State University (SCSU) Economics graduate. Lynn MacDonald, Ph.D., is an associate professor of economics at SCSU.

The State’s Largest Industry With more than 500,000 jobs in the first quarter of 2020, health care and social assistance is easily the largest employing industry in Minnesota, accounting for more than one in every six jobs in the state. It also provides the largest industry payroll, topping more than $27.1 billion in wages for workers in 2019. How have things changed in the last 20 years?

200,000 The number of jobs added in health care and social assistance since 2000, that’s a 64 percent increase

a program’s success. It’s crucial we find ways to encourage women and minorities to enter the STEM fields given the advantages increased participation has for individuals and for businesses. As economists Lisa Cook and Chaleampong Kongcharoen state: “Patent teams, firms, and the economy will continue to perform at suboptimal levels without diverse teams and inclusion.” s For the references used in this story, visit BusinessCentral Magazine.com 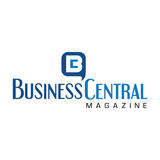