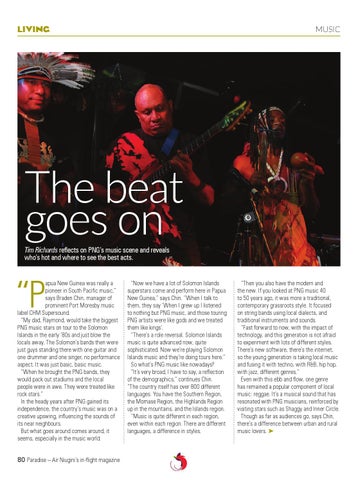 The beat goes on Tim Richards reflects on PNG’s music scene and reveals who’s hot and where to see the best acts.

apua New Guinea was really a pioneer in South Pacific music,” says Braden Chin, manager of prominent Port Moresby music label CHM Supersound. “My dad, Raymond, would take the biggest PNG music stars on tour to the Solomon Islands in the early ’80s and just blow the locals away. The Solomon’s bands then were just guys standing there with one guitar and one drummer and one singer, no performance aspect. It was just basic, basic music. “When he brought the PNG bands, they would pack out stadiums and the local people were in awe. They were treated like rock stars.” In the heady years after PNG gained its independence, the country’s music was on a creative upswing, influencing the sounds of its near neighbours. But what goes around comes around, it seems, especially in the music world.

“Now we have a lot of Solomon Islands superstars come and perform here in Papua New Guinea,” says Chin. “When I talk to them, they say ‘When I grew up I listened to nothing but PNG music, and those touring PNG artists were like gods and we treated them like kings’. “There’s a role reversal. Solomon Islands music is quite advanced now, quite sophisticated. Now we’re playing Solomon Islands music and they’re doing tours here.” So what’s PNG music like nowadays? “It’s very broad, I have to say, a reflection of the demographics,” continues Chin. “The country itself has over 800 different languages. You have the Southern Region, the Momase Region, the Highlands Region up in the mountains, and the Islands region. “Music is quite different in each region, even within each region. There are different languages, a difference in styles.

“Then you also have the modern and the new. If you looked at PNG music 40 to 50 years ago, it was more a traditional, contemporary grassroots style. It focused on string bands using local dialects, and traditional instruments and sounds. “Fast forward to now, with the impact of technology, and this generation is not afraid to experiment with lots of different styles. There’s new software, there’s the internet, so the young generation is taking local music and fusing it with techno, with R&B, hip hop, with jazz, different genres.” Even with this ebb and flow, one genre has remained a popular component of local music: reggae. It’s a musical sound that has resonated with PNG musicians, reinforced by visiting stars such as Shaggy and Inner Circle. Though as far as audiences go, says Chin, there’s a difference between urban and rural music lovers. ➤

The September/October 2014 issue (Vol 4, 2014) of 'Paradise' magazine, the in-flight magazine of Air Niugini, the national airline of Papua...

The September/October 2014 issue (Vol 4, 2014) of 'Paradise' magazine, the in-flight magazine of Air Niugini, the national airline of Papua...