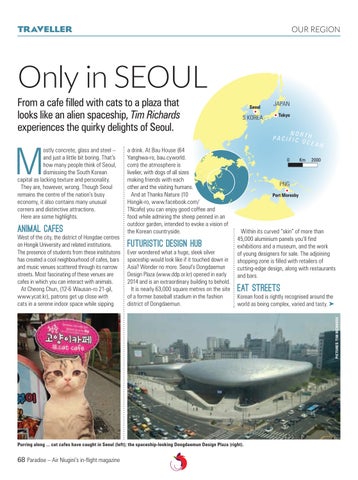 Only in SEOUL From a cafe filled with cats to a plaza that looks like an alien spaceship, Tim Richards experiences the quirky delights of Seoul.

ostly concrete, glass and steel – and just a little bit boring. That’s how many people think of Seoul, dismissing the South Korean capital as lacking texture and personality. They are, however, wrong. Though Seoul remains the centre of the nation’s busy economy, it also contains many unusual corners and distinctive attractions. Here are some highlights.

Futuristic design hub Ever wondered what a huge, sleek silver spaceship would look like if it touched down in Asia? Wonder no more. Seoul’s Dongdaemun Design Plaza (www.ddp.or.kr) opened in early 2014 and is an extraordinary building to behold. It is nearly 63,000 square metres on the site of a former baseball stadium in the fashion district of Dongdaemun.

Within its curved “skin” of more than 45,000 aluminium panels you’ll find exhibitions and a museum, and the work of young designers for sale. The adjoining shopping zone is filled with retailers of cutting-edge design, along with restaurants and bars.

Eat streets Korean food is rightly recognised around the world as being complex, varied and tasty. PICTURES: TIM RICHARDS

West of the city, the district of Hongdae centres on Hongik University and related institutions. The presence of students from these insititutons has created a cool neighbourhood of cafes, bars and music venues scattered through its narrow streets. Most fascinating of these venues are cafes in which you can interact with animals. At Cheong Chun, (12-6 Wausan-ro 21-gil, www.ycat.kr), patrons get up close with cats in a serene indoor space while sipping

a drink. At Bau House (64 Yanghwa-ro, bau.cyworld. com) the atmosphere is livelier, with dogs of all sizes making friends with each other and the visiting humans. And at Thanks Nature (10 Hongik-ro, www.facebook.com/ TNcafe) you can enjoy good coffee and food while admiring the sheep penned in an outdoor garden, intended to evoke a vision of the Korean countryside.