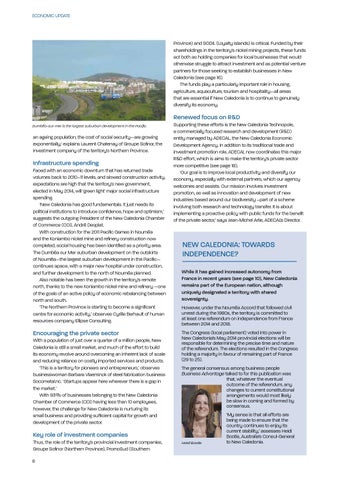 Province) and SODIL (Loyalty Islands) is critical. Funded by their shareholdings in the territory’s nickel mining projects, these funds act both as holding companies for local businesses that would otherwise struggle to attract investment and as potential venture partners for those seeking to establish businesses in New Caledonia (see page 16). The funds play a particularly important role in housing, agriculture, aquaculture, tourism and hospitality—all areas that are essential if New Caledonia is to continue to genuinely diversify its economy.

Renewed focus on R&amp;D Dumbéa-sur-mer is the largest suburban development in the Pacific.

Infrastructure spending Faced with an economic downturn that has returned trade volumes back to 2010–11 levels, and slowed construction activity, expectations are high that the territory’s new government, elected in May 2014, will &#39;green light&#39; major social infrastructure spending. ‘New Caledonia has good fundamentals. It just needs its political institutions to introduce confidence, hope and optimism,’ suggests the outgoing President of the New Caledonia Chamber of Commerce (CCI), André Desplat. With construction for the 2011 Pacific Games in Nouméa and the Koniambo nickel mine and refinery construction now completed, social housing has been identified as a priority area. The Dumbéa sur Mer suburban development on the outskirts of Nouméa—the largest suburban development in the Pacific— continues apace, with a major new hospital under construction, and further development to the north of Nouméa planned. Also notable has been the growth in the territory’s remote north, thanks to the new Koniambo nickel mine and refinery —one of the goals of an active policy of economic rebalancing between north and south. ‘The Northern Province is starting to become a significant centre for economic activity,’ observes Cyrille Berhault of human resources company Ellipse Consulting.

Encouraging the private sector With a population of just over a quarter of a million people, New Caledonia is still a small market, and much of the effort to build its economy revolve around overcoming an inherent lack of scale and reducing reliance on costly imported services and products. ‘This is a territory for pioneers and entrepreneurs,’ observes businesswoman Barbara Vlaeminck of steel fabrication business Socometal.nc. ‘Startups appear here wherever there is a gap in the market.’ With 93% of businesses belonging to the New Caledonia Chamber of Commerce (CCI) having less than 10 employees, however, the challenge for New Caledonia is nurturing its small business and providing sufficient capital for growth and development of the private sector.

Supporting these efforts is the New Caledonia Technopole, a commercially focused research and development (R&amp;D) entity managed by ADECAL, the New Caledonia Economic Development Agency. In addition to its traditional trade and investment promotion role, ADECAL now coordinates this major R&amp;D effort, which is aims to make the territory’s private sector more competitive (see page 18). ‘Our goal is to improve local productivity and diversify our economy, especially with external partners, which our agency welcomes and assists. Our mission involves Investment promotion, as well as innovation and development of new industries based around our biodiversity –part of a scheme involving both research and technology transfer. It is about implementing a proactive policy with public funds for the benefit of the private sector,’ says Jean-Michel Arlie, ADECAL’s Director.

New Caledonia: towards independence? While it has gained increased autonomy from France in recent years (see page 10), New Caledonia remains part of the European nation, although uniquely designated a territory with shared sovereignty. However, under the Nouméa Accord that followed civil unrest during the 1980s, the territory is committed to at least one referendum on independence from France between 2014 and 2018. The Congress (local parliament) voted into power in New Caledonia’s May 2014 provincial elections will be responsible for determining the precise time and nature of the referendum. The elections resulted in the Congress holding a majority in favour of remaining part of France (29 to 25). The general consensus among business people Business Advantage talked to for this publication was that, whatever the eventual outcome of the referendum, any changes to current constitutional arrangements would most likely be slow in coming and formed by consensus. ‘My sense is that all efforts are being made to ensure that the country continues to enjoy its current stability,’ assesses Heidi Bootle, Australia’s Consul-General to New Caledonia. Heidi Bootle