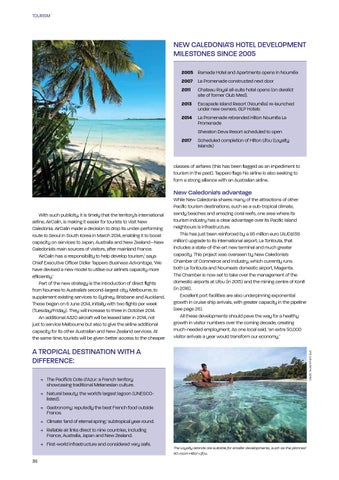 New Caledonia’s advantage With such publicity, it is timely that the territory’s international airline, AirCalin, is making it easier for tourists to visit New Caledonia. AirCalin made a decision to drop its under-performing route to Seoul in South Korea in March 2014, enabling it to boost capacity on services to Japan, Australia and New Zealand—New Caledonia’s main sources of visitors, after mainland France. ‘AirCalin has a responsibility to help develop tourism,’ says Chief Executive Officer Didier Tappero Business Advantage, ‘We have devised a new model to utilise our airline’s capacity more efficiently.’ Part of the new strategy is the introduction of direct flights from Noumea to Australia’s second-largest city, Melbourne, to supplement existing services to Sydney, Brisbane and Auckland. These began on 6 June 2014, initially with two flights per week (Tuesday/Friday). They will increase to three in October 2014. An additional A320 aircraft will be leased later in 2014, not just to service Melbourne but also to give the airline additional capacity for its other Australian and New Zealand services. At the same time, tourists will be given better access to the cheaper

While New Caledonia shares many of the attractions of other Pacific tourism destinations, such as a sub-tropical climate, sandy beaches and amazing coral reefs, one area where its tourism industry has a clear advantage over its Pacific Island neighbours is infrastructure. This has just been reinforced by a 95 million euro (AUD$138 million) upgrade to its international airport, La Tontouta, that includes a state-of-the-art new terminal and much greater capacity. This project was overseen by New Caledonia’s Chamber of Commerce and Industry, which currently runs both La Tontouta and Noumea’s domestic airport, Magenta. The Chamber is now set to take over the management of the domestic airports at Lifou (in 2015) and the mining centre of Koné (in 2016). Excellent port facilities are also underpinning exponential growth in cruise ship arrivals, with greater capacity in the pipeline (see page 26). All these developments should pave the way for a healthy growth in visitor numbers over the coming decade, creating much-needed employment. As one local said, ‘an extra 50,000 visitor arrivals a year would transform our economy.’

A tropical destination with a difference:

The Loyalty Islands are suitable for smaller developments, such as the planned 50-room Hilton Lifou.