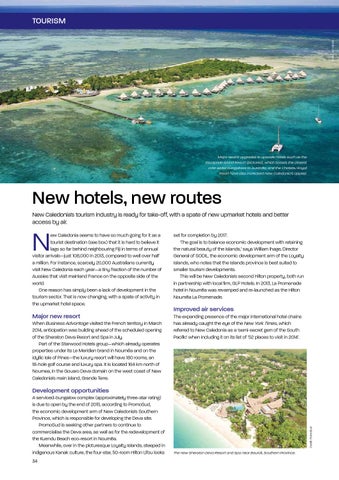 Major recent upgrades to upscale hotels such as the Escapade Island Resort (pictured), which boasts the closest over-water bungalows to Australia, and the Chateau Royal resort have also increased New Caledonia’s appeal.

ew Caledonia seems to have so much going for it as a tourist destination (see box) that it is hard to believe it lags so far behind neighbouring Fiji in terms of annual visitor arrivals—just 108,000 in 2013, compared to well over half a million. For instance, scarcely 20,000 Australians currently visit New Caledonia each year—a tiny fraction of the number of Aussies that visit mainland France on the opposite side of the world. One reason has simply been a lack of development in the tourism sector. That is now changing, with a spate of activity in the upmarket hotel space.

set for completion by 2017. ‘The goal is to balance economic development with retaining the natural beauty of the islands,’ says William Ihage, Director General of SODIL, the economic development arm of the Loyalty Islands, who notes that the Islands province is best suited to smaller tourism developments. This will be New Caledonia’s second Hilton property, both run in partnership with local firm, GLP Hotels. In 2013, La Promenade hotel in Nouméa was revamped and re-launched as the Hilton Nouméa La Promenade.

The expanding presence of the major international hotel chains has already caught the eye of the New York Times, which referred to New Caledonia as a ‘semi-secret gem of the South Pacific’ when including it on its list of ‘52 places to visit in 2014’.

When Business Advantage visited the French territory in March 2014, anticipation was building ahead of the scheduled opening of the Sheraton Deva Resort and Spa in July. Part of the Starwood Hotels group—which already operates properties under its Le Meridien brand in Nouméa and on the idyllic Isle of Pines—the luxury resort will have 180 rooms, an 18-hole golf course and luxury spa. It is located 164 km north of Noumea, in the Gouaro Deva domain on the west coast of New Caledonia’s main island, Grande Terre.

A serviced-bungalow complex (approximately three-star rating) is due to open by the end of 2015, according to PromoSud, the economic development arm of New Caledonia’s Southern Province, which is responsible for developing the Deva site. PromoSud is seeking other partners to continue to commercialise the Deva area, as well as for the redevelopment of the Kuendu Beach eco-resort in Nouméa. Meanwhile, over in the picturesque Loyalty Islands, steeped in indigenous Kanak culture, the four-star, 50-room Hilton Lifou looks 34