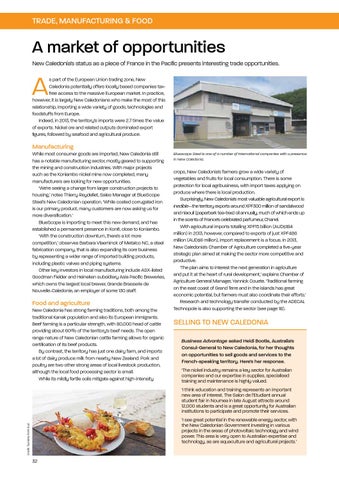 A market of opportunities New Caledonia’s status as a piece of France in the Pacific presents interesting trade opportunities.

s part of the European Union trading zone, New Caledonia potentially offers locally based companies taxfree access to the massive European market. In practice, however, it is largely New Caledonians who make the most of this relationship, importing a wide variety of goods, technologies and foodstuffs from Europe. Indeed, in 2013, the territory’s imports were 2.7 times the value of exports. Nickel ore and related outputs dominated export figures, followed by seafood and agricultural produce.

Manufacturing While most consumer goods are imported, New Caledonia still has a notable manufacturing sector, mostly geared to supporting the mining and construction industries. With major projects such as the Koniambo nickel mine now completed, many manufacturers are looking for new opportunities. ‘We’re seeing a change from larger construction projects to housing,’ notes Thierry Reydellet, Sales Manager at BlueScope Steel’s New Caledonian operation. ‘While coated corrugated iron is our primary product, many customers are now asking us for more diversification.’ BlueScope is importing to meet this new demand, and has established a permanent presence in Koné, close to Koniambo. ‘With the construction downturn, there’s a lot more competition,’ observes Barbara Vlaeminck of Metalco NC, a steel fabrication company, that is also expanding its core business by representing a wider range of imported building products, including plastic valves and piping systems. Other key investors in local manufacturing include ASX-listed Goodman Fielder and Heineken subsidiary Asia Pacific Breweries, which owns the largest local brewer, Grande Brasserie de Nouvelle-Caledonie, an employer of some 130 staff.

New Caledonia has strong farming traditions, both among the traditional Kanak population and also its European immigrants. Beef farming is a particular strength, with 80,000 head of cattle providing about 60% of the territory’s beef needs. The open range nature of New Caledonian cattle farming allows for organic certification of its beef products. By contrast, the territory has just one dairy farm, and imports a lot of dairy produce milk from nearby New Zealand. Pork and poultry are two other strong areas of local livestock production, although the local food processing sector is small. While its mildly fertile soils mitigate against high-intensity

Bluescope Steel is one of a number of international companies with a presence in New Caledonia.

crops, New Caledonia’s farmers grow a wide variety of vegetables and fruits for local consumption. There is some protection for local agribusiness, with import taxes applying on produce where there is local production. Surprisingly, New Caledonia’s most valuable agricultural export is inedible—the territory exports around XPF300 million of sandalwood and niaouli (paperbark tea-tree) oil annually, much of which ends up in the scents of France’s celebrated parfumeur, Chanel. With agricultural imports totalling XPF15 billion (AUD$184 million) in 2013, however, compared to exports of just XPF486 million (AUD$6 million), import replacement is a focus. In 2013, New Caledonia’s Chamber of Agriculture completed a five-year strategic plan aimed at making the sector more competitive and productive. ‘The plan aims to interest the next generation in agriculture and put it at the heart of rural development,’ explains Chamber of Agriculture General Manager, Yannick Couete. ‘Traditional farming on the east coast of Grand Terre and in the islands has great economic potential, but farmers must also coordinate their efforts.’ Research and technology transfer conducted by the ADECAL Technopole is also supporting the sector (see page 18).

Selling to New Caledonia Business Advantage asked Heidi Bootle, Australia’s Consul-General to New Caledonia, for her thoughts on opportunities to sell goods and services to the French-speaking territory. Here’s her response. ‘The nickel industry remains a key sector for Australian companies and our expertise in supplies, specialised training and maintenance is highly valued. ‘I think education and training represents an important new area of interest. The Salon de l’Etudiant annual student fair in Noumea in late August attracts around 12,000 students and is a great opportunity for Australian institutions to participate and promote their services. ‘I see great potential in the renewable energy sector, with the New Caledonian Government investing in various projects in the areas of photovoltaic technology and wind power. This area is very open to Australian expertise and technology, as are aquaculture and agricultural projects.’