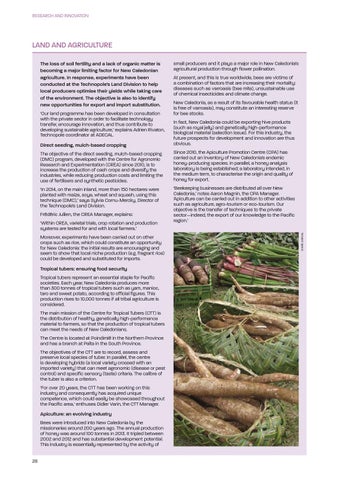 Direct seeding, mulch-based cropping The objective of the direct seeding, mulch-based cropping (DMC) program, developed with the Centre for Agronomic Research and Experimentation (CREA) since 2010, is to increase the production of cash crops and diversify the industries, while reducing production costs and limiting the use of fertilisers and synthetic pesticides. ‘In 2014, on the main inland, more than 150 hectares were planted with maize, soya, wheat and squash, using this technique (DMC),’ says Sylvia Cornu-Mercky, Director of the Technopole’s Land Division. Frédéric Jullien, the CREA Manager, explains: ‘Within CREA, varietal trials, crop rotation and production systems are tested for and with local farmers.’ Moreover, experiments have been carried out on other crops such as rice, which could constitute an opportunity for New Caledonia: the initial results are encouraging and seem to show that local niche production (e.g. fragrant rice) could be developed and substituted for imports. Tropical tubers: ensuring food security Tropical tubers represent an essential staple for Pacific societies. Each year, New Caledonia produces more than 300 tonnes of tropical tubers such as yam, manioc, taro and sweet potato, according to official figures. This production rises to 10,000 tonnes if all tribal agriculture is considered. The main mission of the Centre for Tropical Tubers (CTT) is the distribution of healthy, genetically high-performance material to farmers, so that the production of tropical tubers can meet the needs of New Caledonians. The Centre is located at Poindimié in the Northern Province and has a branch at Païta in the South Province. The objectives of the CTT are to record, assess and preserve local species of tuber. In parallel, the centre is developing hybrids (a local variety crossed with an imported variety) that can meet agronomic (disease or pest control) and specific sensory (taste) criteria. The calibre of the tuber is also a criterion. ‘For over 20 years, the CTT has been working on this industry and consequently has acquired unique competence, which could easily be showcased throughout the Pacific area,’ enthuses Didier Varin, the CTT Manager. Apiculture: an evolving industry Bees were introduced into New Caledonia by the missionaries around 200 years ago. The annual production of honey was around 100 tonnes in 2013. It tripled between 2002 and 2012 and has substantial development potential. This industry is essentially represented by the activity of 28

small producers and it plays a major role in New Caledonia’s agricultural production through flower pollination. At present, and this is true worldwide, bees are victims of a combination of factors that are increasing their mortality: diseases such as varroasis (bee mite), unsustainable use of chemical insecticides and climate change. New Caledonia, as a result of its favourable health status (it is free of varroasis), may constitute an interesting reserve for bee stocks. In fact, New Caledonia could be exporting hive products (such as royal jelly) and genetically high-performance biological material (selection issue). For this industry, the future prospects for development and innovation are thus obvious. Since 2010, the Apiculture Promotion Centre (CPA) has carried out an inventory of New Caledonia’s endemic honey-producing species. In parallel, a honey analysis laboratory is being established; a laboratory intended, in the medium term, to characterise the origin and quality of honey for export. ‘Beekeeping businesses are distributed all over New Caledonia,’ notes Aaron Magnin, the CPA Manager. ‘Apiculture can be carried out in addition to other activities such as agriculture, agro-tourism or eco-tourism. Our objective is the transfer of techniques to the private sector—indeed, the export of our knowledge to the Pacific region.’ Credit: ADECAL

The loss of soil fertility and a lack of organic matter is becoming a major limiting factor for New Caledonian agriculture. In response, experiments have been conducted at the Technopole’s Land Division to help local producers optimise their yields while taking care of the environment. The objective is also to identify new opportunities for export and import substitution. ‘Our land programme has been developed in consultation with the private sector in order to facilitate technology transfer, encourage innovation, and thus contribute to developing sustainable agriculture,’ explains Adrien Rivaton, Technopole coordinator at ADECAL.