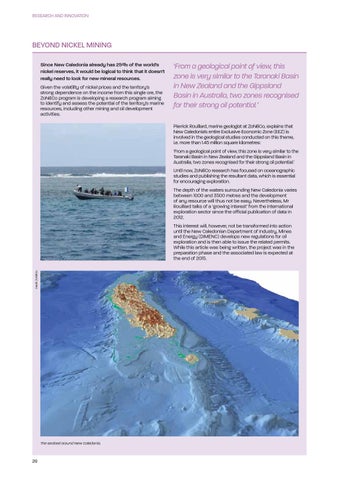 Beyond nickel mining Since New Caledonia already has 25% of the world’s nickel reserves, it would be logical to think that it doesn’t really need to look for new mineral resources. Given the volatility of nickel prices and the territory’s strong dependence on the income from this single ore, the ZoNéCo program is developing a research program aiming to identify and assess the potential of the territory’s marine resources, including other mining and oil development activities.

‘From a geological point of view, this zone is very similar to the Taranaki Basin in New Zealand and the Gippsland Basin in Australia, two zones recognised for their strong oil potential.’

Pierrick Rouillard, marine geologist at ZoNéCo, explains that New Caledonia’s entire Exclusive Economic Zone (EEZ) is involved in the geological studies conducted on this theme, i.e. more than 1.45 million square kilometres: ‘From a geological point of view, this zone is very similar to the Taranaki Basin in New Zealand and the Gippsland Basin in Australia, two zones recognised for their strong oil potential.’ Until now, ZoNéCo research has focused on oceanographic studies and publishing the resultant data, which is essential for encouraging exploration. The depth of the waters surrounding New Caledonia varies between 1000 and 3500 metres and the development of any resource will thus not be easy. Nevertheless, Mr Rouillard talks of a ‘growing interest’ from the international exploration sector since the official publication of data in 2012. This interest will, however, not be transformed into action until the New Caledonian Department of Industry, Mines and Energy (DIMENC) develops new regulations for oil exploration and is then able to issue the related permits. While this article was being written, the project was in the preparation phase and the associated law is expected at the end of 2015.

The seabed around New Caledonia.