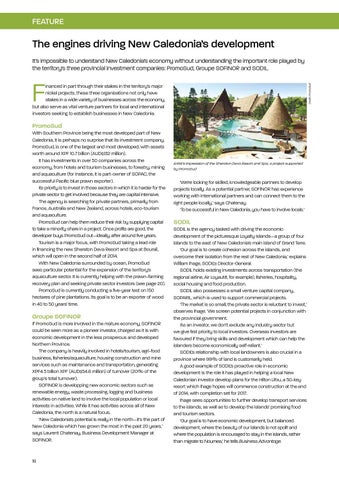 inanced in part through their stakes in the territory’s major nickel projects, these three organisations not only have stakes in a wide variety of businesses across the economy, but also serve as vital venture partners for local and international investors seeking to establish businesses in New Caledonia.

PromoSud With Southern Province being the most developed part of New Caledonia, it is perhaps no surprise that its investment company, PromoSud, is one of the largest and most developed, with assets worth around XPF 10.7 billion (AUD$132 million). It has investments in over 50 companies across the economy, from hotels and tourism businesses, to forestry, mining and aquaculture (for instance, it is part-owner of SOPAC, the successful Pacific blue prawn exporter). Its priority is to invest in those sectors in which it is harder for the private sector to get involved because they are capital intensive. The agency is searching for private partners, primarily from France, Australia and New Zealand, across hotels, eco-tourism and aquaculture. PromoSud can help them reduce their risk by supplying capital to take a minority share in a project. Once profits are good, the developer buys PromoSud out—ideally, after around five years. Tourism is a major focus, with PromoSud taking a lead role in financing the new Sheraton Deva Resort and Spa at Bourail, which will open in the second half of 2014. With New Caledonia surrounded by ocean, PromoSud sees particular potential for the expansion of the territory’s aquaculture sector. It is currently helping with the prawn-farming recovery plan and seeking private sector investors (see page 20). PromoSud is currently conducting a five-year test on 150 hectares of pine plantations. Its goal is to be an exporter of wood in 40 to 50 years’ time.

Groupe SOFINOR If PromoSud is more involved in the mature economy, SOFINOR could be seen more as a pioneer investor, charged as it is with economic development in the less prosperous and developed Northern Province. The company is heavily involved in hotels/tourism, agri-food business, fisheries/aquaculture, housing construction and mine services such as maintenance and transportation, generating XPF4.5 billion XPF (AUD$54.6 million) of turnover (20% of the group&#39;s total turnover). SOFINOR is developping new economic sectors such as renewable energy, waste processing, logging and business activities on native land to involve the local population or local interests in activities. While it has activities across all of New Caledonia, the north is a natural focus. ‘New Caledonia’s potential is really in the north—it’s the part of New Caledonia which has grown the most in the past 20 years,’ says Laurent Chatenay, Business Development Manager at SOFINOR.

Artist’s impression of the Sheraton Deva Resort and Spa, a project supported by PromoSud

‘We’re looking for skilled, knowledgeable partners to develop projects locally. As a potential partner, SOFINOR has experience working with international partners and can connect them to the right people locally,’ says Chatenay. ‘To be successful in New Caledonia, you have to involve locals.’

SODIL SODIL is the agency tasked with driving the economic development of the picturesque Loyalty Islands—a group of four islands to the east of New Caledonia’s main island of Grand Terre. ‘Our goal is to create cohesion across the islands, and overcome their isolation from the rest of New Caledonia,’ explains William Ihage, SODIL’s Director-General. SODIL holds existing investments across transportation (the regional airline, Air Loyauté, for example), fisheries, hospitality, social housing and food production. SODIL also possesses a small venture capital company, SOPARIL, which is used to support commercial projects. ‘The market is so small, the private sector is reluctant to invest,’ observes Ihage. ‘We screen potential projects in conjunction with the provincial government. ‘As an investor, we don’t exclude any industry sector but we give first priority to local investors. Overseas investors are favoured if they bring skills and development which can help the islanders become economically self-reliant.’ SODIL’s relationship with local landowners is also crucial in a province where 99% of land is customarily held. A good example of SODIL’s proactive role in economic development is the role it has played in helping a local New Caledonian investor develop plans for the Hilton Lifou, a 50-key resort which Ihage hopes will commence construction at the end of 2014, with completion set for 2017. Ihage sees opportunities to further develop transport services to the islands, as well as to develop the islands’ promising food and tourism sectors. ‘Our goal is to have economic development, but balanced development, where the beauty of our islands is not spoilt and where the population is encouraged to stay in the islands, rather than migrate to Noumea,’ he tells Business Advantage.