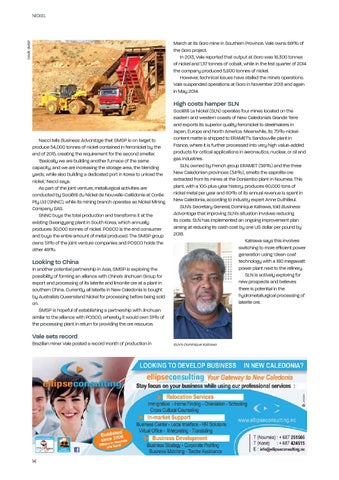 March at its Goro mine in Southern Province. Vale owns 69% of the Goro project. In 2013, Vale reported that output at Goro was 16,300 tonnes of nickel and 1,117 tonnes of cobalt, while in the first quarter of 2014 the company produced 5,600 tonnes of nickel. However, technical issues have stalled the mine’s operations. Vale suspended operations at Goro in November 2013 and again in May 2014.

Nacci tells Business Advantage that SMSP is on target to produce 54,000 tonnes of nickel contained in ferronickel by the end of 2015, creating the requirement for the second smelter. &#39;Basically we are building another furnace of the same capacity, and we are increasing the storage area, the blending yards, while also building a dedicated port in Korea to unload the nickel,&#39; Nacci says. As part of the joint venture, metallurgical activities are conducted by Société du Nickel de Nouvelle-Calédonie et Corée Pty Ltd (SNNC), while its mining branch operates as Nickel Mining Company SAS. SNNC buys the total production and transforms it at the existing Gwangyang plant in South Korea, which annually produces 30,000 tonnes of nickel. POSCO is the end consumer and buys the entire amount of metal produced. The SMSP group owns 51% of the joint venture companies and POSCO holds the other 49%.

Looking to China In another potential partnership in Asia, SMSP is exploring the possibility of forming an alliance with China’s Jinchuan Group for export and processing of its laterite and limonite ore at a plant in southern China. Currently, all laterite in New Caledonia is bought by Australia’s Queensland Nickel for processing before being sold on. SMSP is hopeful of establishing a partnership with Jinchuan similar to the alliance with POSCO, whereby it would own 51% of the processing plant in return for providing the ore resource.

Société Le Nickel (SLN) operates four mines located on the eastern and western coasts of New Caledonia’s Grande Terre and exports its superior quality ferronickel to steelmakers in Japan, Europe and North America. Meanwhile, its 75%-nickelcontent matte is shipped to ERAMET’s Sandouville plant in France, where it is further processed into very high value-added products for critical applications in aeronautics, nuclear, or oil and gas industries. SLN, owned by French group ERAMET (56%) and the three New Caledonian provinces (34%), smelts the saprolite ore extracted from its mines at the Doniambo plant in Noumea. This plant, with a 100-plus-year history, produces 60,000 tons of nickel metal per year and 60% of its annual revenue is spent in New Caledonia, according to industry expert Anne Duthilleul. SLN’s Secretary General, Dominique Katrawa, told Business Advantage that improving SLN’s situation involves reducing its costs. SLN has implemented an ongoing improvement plan aiming at reducing its cash cost by one US dollar per pound by 2018. Katrawa says this involves switching to more efficient power generation using ‘clean coal’ technology with a 180 megawatt power plant next to the refinery. SLN is actively exploring for new prospects and believes there is potential in the hydrometallurgical processing of laterite ore.