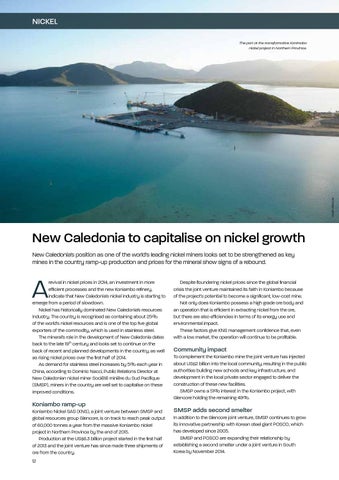 The port at the transformative Konimabo nickel project in Northern Province.

New Caledonia to capitalise on nickel growth New Caledonia’s position as one of the world’s leading nickel miners looks set to be strengthened as key mines in the country ramp-up production and prices for the mineral show signs of a rebound.

revival in nickel prices in 2014, an investment in more efficient processes and the new Koniambo refinery, indicate that New Caledonia’s nickel industry is starting to emerge from a period of slowdown. Nickel has historically dominated New Caledonia’s resources industry. The country is recognised as containing about 25% of the world’s nickel resources and is one of the top five global exporters of the commodity, which is used in stainless steel. The mineral’s role in the development of New Caledonia dates back to the late 19th century and looks set to continue on the back of recent and planned developments in the country, as well as rising nickel prices over the first half of 2014. As demand for stainless steel increases by 5% each year in China, according to Dominic Nacci, Public Relations Director at New Caledonian nickel miner Société minière du Sud Pacifique (SMSP), miners in the country are well set to capitalise on these improved conditions.

Koniambo ramp-up Koniambo Nickel SAS (KNS), a joint venture between SMSP and global resources group Glencore, is on track to reach peak output of 60,000 tonnes a year from the massive Koniambo nickel project in Northern Province by the end of 2015. Production at the US$6.3 billion project started in the first half of 2013 and the joint venture has since made three shipments of ore from the country. 12

Despite floundering nickel prices since the global financial crisis the joint venture maintained its faith in Koniambo because of the project’s potential to become a significant, low-cost mine. Not only does Koniambo possess a high grade ore body and an operation that is efficient in extracting nickel from the ore, but there are also efficiencies in terms of its energy use and environmental impact. These factors give KNS management confidence that, even with a low market, the operation will continue to be profitable.

Community impact To complement the Koniambo mine the joint venture has injected about US$2 billion into the local community, resulting in the public authorities building new schools and key infrastructure, and development in the local private sector engaged to deliver the construction of these new facilities. SMSP owns a 51% interest in the Koniambo project, with Glencore holding the remaining 49%.

SMSP adds second smelter In addition to the Glencore joint venture, SMSP continues to grow its innovative partnership with Korean steel giant POSCO, which has developed since 2005. SMSP and POSCO are expanding their relationship by establishing a second smelter under a joint venture in South Korea by November 2014.