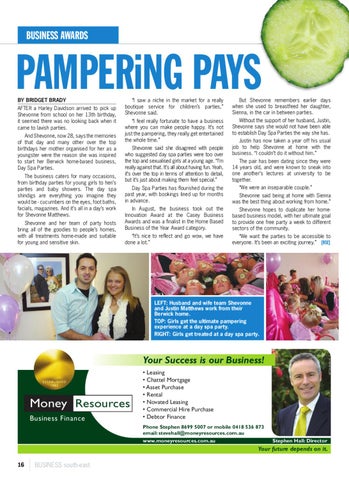 PAMPERiNG PAYS BY BRIDGET BRADY AFTER a Harley Davidson arrived to pick up Shevonne from school on her 13th birthday, it seemed there was no looking back when it came to lavish parties. And Shevonne, now 28, says the memories of that day and many other over the top birthdays her mother organised for her as a youngster were the reason she was inspired to start her Berwick home-based business, Day Spa Parties. The business caters for many occasions, from birthday parties for young girls to hen’s parties and baby showers. The day spa shindigs are everything you imagine they would be - cucumbers on the eyes, foot baths, facials, magazines. And it’s all in a day’s work for Shevonne Matthews. Shevonne and her team of party hosts bring all of the goodies to people’s homes, with all treatments home-made and suitable for young and sensitive skin.

“I saw a niche in the market for a really boutique service for children’s parties,” Shevonne said.

But Shevonne vonne remembers earlier days when she used to breastfeed her daughter, Sienna, in the car in between parties.

“I feel really fortunate to have a business where you can make people happy. It’s not just the pampering, they really get entertained the whole time.”

Without the support of her husband, Justin, Shevonne says she would not have been able to establish Day Spa Parties the way she has.

Shevonne said she disagreed with people who suggested day spa parties were too over the top and sexualised girls at a young age. “I’m really against that. It’s all about having fun. Yeah, it’s over the top in terms of attention to detail, but it’s just about making them feel special.”

Justin has now taken a year off his usual job to help Shevonne at home with the business. “I couldn’t do it without him.” The pair has been dating since they were 14 years old, and were known to sneak into one another’s lectures at university to be together. “We were an inseparable couple.”

Day Spa Parties has flourished during the past year, with bookings lined up for months in advance.

Shevonne said being at home with Sienna was the best thing about working from home.”

In August, the business took out the Innovation Award at the Casey Business Awards and was a finalist in the Home Based Business of the Year Award category.

Shevonne hopes to duplicate her homebased business model, with her ultimate goal to provide one free party a week to different sectors of the community.

“It’s nice to reflect and go wow, we have done a lot.”

“We want the parties to be accessible to everyone. It’s been an exciting journey.” [BSE]

Your future depends on it. 16 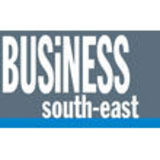