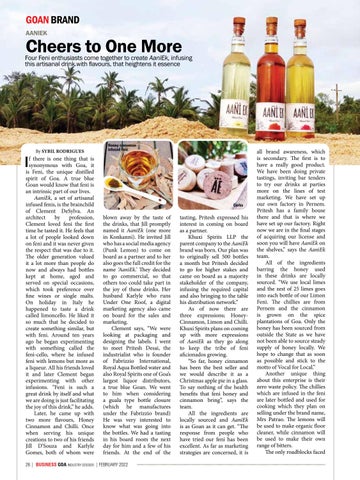 Cheers to One More

Four Feni enthusiasts come together to create AaniEk, infusing this artisanal drink with flavours, that heightens it essence

f there is one thing that is synonymous with Goa, it is Feni, the unique distilled spirit of Goa. A true blue Goan would know that feni is an intrinsic part of our lives. AaniEk, a set of artisanal infused fenis, is the brainchild of Clement DeSylva. An architect by profession, Clement loved feni the first time he tasted it. He feels that a lot of people looked down on feni and it was never given the respect that was due to it. The older generation valued it a lot more than people do now and always had bottles kept at home, aged and served on special occasions, which took preference over fine wines or single malts. On holiday in Italy he happened to taste a drink called limoncello. He liked it so much that he decided to create something similar, but with feni. Around ten years ago he began experimenting with something called the feni-cello, where he infused feni with lemons but more as a liqueur. All his friends loved it and later Clement began experimenting with other infusions. “Feni is such a great drink by itself and what we are doing is just facilitating the joy of this drink,” he adds. Later, he came up with two more flavours, Honey Cinnamon and Chilli. Once when serving his unique creations to two of his friends Jill D’Souza and Karlyle Gomes, both of whom were

blown away by the taste of the drinks, that Jill promptly named it AaniEk (one more in Konkanni). He invited Jill who has a social media agency (Punk Lemon) to come on board as a partner and to her also goes the full credit for the name ‘AaniEk.’ They decided to go commercial, so that others too could take part in the joy of these drinks. Her husband Karlyle who runs Under One Roof, a digital marketing agency also came on board for the sales and marketing. Clement says, “We were looking at packaging and designing the labels. I went to meet Pritesh Desai, the industrialist who is founder of Fabrizzio International, Royal Aqua Bottled water and also Royal Spirits one of Goa’s largest liquor distributors, a true blue Goan. We went to him when considering a guala type bottle closure (which he manufactures under the Fabrizzio brand) He was very interested to know what was going into the bottles. We had a tasting in his board room the next day for him and a few of his friends. At the end of the

tasting, Pritesh expressed his interest in coming on board as a partner. Khuxi Spirits LLP the parent company to the AaniEk brand was born. Our plan was to originally sell 500 bottles a month but Pritesh decided to go for higher stakes and came on board as a majority stakeholder of the company, infusing the required capital and also bringing to the table his distribution network.” As of now there are three expressions; HoneyCinnamon, Limon and Chilli. Khuxi Spirits plans on coming up with more expressions of AaniEk as they go along to keep the tribe of feni aficionados growing. “So far, honey cinnamon has been the best seller and we would describe it as a Christmas apple pie in a glass. To say nothing of the health benefits that feni honey and cinnamon bring”, says the team. All the ingredients are locally sourced and AaniEk is as Goan as it can get. “The response from people who have tried our feni has been excellent. As far as marketing strategies are concerned, it is

all brand awareness, which is secondary. The first is to have a really good product. We have been doing private tastings, inviting bar tenders to try our drinks at parties more on the lines of test marketing. We have set up our own factory in Pernem. Pritesh has a family house there and that is where we have set up our factory. Right now we are in the final stages of acquiring our license and soon you will have AaniEk on the shelves,” says the AaniEk team. All of the ingredients barring the honey used in these drinks are locally sourced. “We use local limes and the zest of 25 limes goes into each bottle of our Limon Feni. The chillies are from Pernem and the cinnamon is grown on the spice plantations of Goa. Only the honey has been sourced from outside the State as we have not been able to source steady supply of honey locally. We hope to change that as soon as possible and stick to the motto of Vocal for Local.” Another unique thing about this enterprise is their zero waste policy. The chillies which are infused in the feni are later bottled and used for cooking which they plan on selling under the brand name, Mrs Patrao. The lemons will be used to make organic floor cleaner, while cinnamon will be used to make their own range of bitters. The only roadblocks faced

The February 2022 issue of Business Goa has Tulip Diagnostics (P) Ltd., one of the largest manufacturers of in-vitro diagnostic reagents and kits in India, headed by DEEPAK G. TRIPATHI, as the Cover Story. The National Focus has economist Satyendra Nayak analysing Union Budget 2022. Focus Goa sees Ralph De Sousa elaborating on the industry’s expectations from the new Government; and Manguirish Pai Raiker deconstructs the new draft policy for MSMEs. Enterprise features Turakhia Opticians. AaniEk, is the Goan Brand which curates infused feni with various flavours. Interview has Ajit Dalvi, Senior Vice President – Retail Branch Banking, HDF Bank. Dr. Pratiksha Khalap, vice chair of Yi-Goa is on the Lady Power page. Bon Appétit highlights the best of Goan Saraswat cuisine which is on offer at Kokum Curry. Hospitality focuses on the beachside resort, The Ark Comforts. All this and a lot more in Goa’s only business magazine. 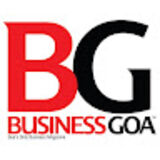