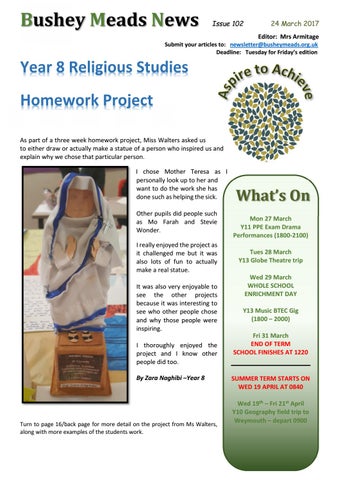 Submit your articles to: newsletter@busheymeads.org.uk Deadline: Tuesday for Friday’s edition

Year 8 Religious Studies Homework Project As part of a three week homework project, Miss Walters asked us to either draw or actually make a statue of a person who inspired us and explain why we chose that particular person. I chose Mother Teresa as I personally look up to her and want to do the work she has done such as helping the sick. Other pupils did people such as Mo Farah and Stevie Wonder. I really enjoyed the project as it challenged me but it was also lots of fun to actually make a real statue. It was also very enjoyable to see the other projects because it was interesting to see who other people chose and why those people were inspiring. I thoroughly enjoyed the project and I know other people did too. By Zara Naghibi –Year 8

Turn to page 16/back page for more detail on the project from Ms Walters, along with more examples of the students work.

MARVIN (09Oak) Marvin is this weekâ&#x20AC;&#x2122;s KS3 student of the week for his exceptional attitude to learning and extracurricular activities. Marvin is a pleasure to teach and works hard in and out of the classroom. One of these exceptional achievements is being selected to attend the prestigious Trinity Laban Conservatoire of Music and Dance. Marvin was also part of the Hertfordshire Dance Festival and was a credit to the school. We are very proud of you Marvin!

SADIQ (10Ash) This weekâ&#x20AC;&#x2122;s KS4 student of the week is Sadiq, for his enthusiastic approach to his learning. Sadiq has over 200 achievement points, bringing him into the top 10 in year 10! He has great ATL scores in his most recent assessment and excellent attendance. Sadiq is polite and hardworking and a pleasure to teach. Keep up the great work and no doubt you will achieve your potential.

ADEM(13Maple) Adem recently achieved 95% in his C3 paper in mathematics. This is a fantastic achievement and one that shows how hard work pays off. Adem is looking to study Software Engineering at University and if he keeps up this level of dedication to his studies I am confident he will reach his goal.

Next Staff Development Day is Tues 2 May, the day following the May Day bank holiday. Students therefore return to school on Wed 3 May at 8.40am.

It has been a busy time for Beech House recently with lots of students involved in many different events... There has been the canned food drive which lots of students contributed to, especially 7Beech. This week has been Health Week and all our students have been donating their ÂŁ2 to take part in the charity fun run for the British Heart Foundation which took place on Friday. There have been many fancy dress efforts for this great cause. In addition to these charity events there is a core of talented students who have been preparing for the House Music competition which is due to take place after the Easter Holidays. Big thanks to Alastair Bointon and Daisy Wardell (12Beech) for organising the practices and supporting the younger students.

To avoid congestion in front of the school we recommend that you park further away from the school site and then the students can walk the rest of the way. We have suggested drop off points for the “Park and Stride” initiative as detailed below.

All of those students have achieved grade Bs and above, with a staggering 106 achieving an A* grade. During the assembly Richard Abrahams shook the hands of all 118 and spoke to the audience of Year 10 and 11 students, inspiring them to work hard, believe in themselves and reap the rewards of success. Mr Fisher, Senior Assistant Headteacher

There was a high turnout of Year 9 students on Wednesday evening, all excited at the prospects of making their GCSE choices. Students and their parents or carers started off in the main hall where they were given a comprehensive options booklet to study and listened to short explanations of the options process from by Mr Fisher and Mr Malik.

For the rest of the evening some 40 teachers had set up presentations around the school and were on hand, together with some existing GCSE students, to explain their subjects in detail. Students now have until we return from Easter to finalise their choices before we begin to process the data. Mr Fisher, Senior Assistant Headteacher

STAFF VACANCIES AT BUSHEY MEADS SCHOOL We are currently advertising for the following staff positions at Bushey Meads School: RE Teacher Psychology Teacher Pastoral Administration Apprentice Further information can be found on the school website under â&#x20AC;&#x2DC;Vacanciesâ&#x20AC;&#x2122;. Alternatively, please contact the HR office on 020 8955 8833 or email: vacancies@busheymeads.org.uk

Miss Rowden, Head of Dance On Tuesday 14th March we took 13 students from across Year 7 – 10 to perform at ‘The Alban Arena’, for the Hertfordshire County Dance Festival. It was an amazing day and the students were an asset to Bushey Meads School. Many schools from around the county including, primary and secondary schools performed in the festival and it was a fantastic collaborative event, where students were able to share their interests in dance with others from across the county.

The students performed in a matinee and evening show and received comments from other schools and members of the county dance association about their professionalism and energy throughout the piece. I was very proud of all the students and hope that this is the first of many to come. A big thank you also to Mr Malik, Assistant Pastoral Manager Y9&10 and Mrs Andrews, TAPI, for all their help.

Kanishka, 9 Sycamore commented, ‘It was an incredible experience and it really inspired me to pursue my dance studies further. I loved being around other students who shared the same interest for dance as me’.

As a Trust we are delighted to announce that Little Reddings Primary School is appearing for the ASDA Watford (dome roundabout) green token scheme and will remain till the end of March. If, as a parent of a student in the Bushey St James Trust, you shop in ASDA please ensure you collect your green token and deposit it under 'Little Reddings'! Do also tell you friends and families as all tokens will help towards raising funds for our primary school within the Trust.

Are you a hidden musician that doesn’t get the opportunity to show off your skill? Are you an instrumentalist or singer? This year the music department is launching its own Young Musician of the Year award, open to instrumentalists - from brass players to pianists to sitar players, and singers across all the key stages to celebrate those accomplished musicians amongst the school. Any musician is welcome to apply. Most categories within the competition will be for solo musicians, however there will also be an opportunity for ensembles or choirs to take part in the competition. Any style of music is welcomed from classical to Carnatic! All money raised will go towards the music department funding campaign for new instruments. Deadline for applications is the 21st of April with the first round of auditions commencing Monday 24th April. Please collect a slip from Miss Brown or Miss Craven.

Star of the Disability Shooting National Championship The weekend of 11th /12th March was an exciting one for Melisa (07Willow), because she participated in her first national shooting championship. Some of us in Base were delighted to have the opportunity to go along and watch. Melisa was recognised as having Paralympic potential when she attended the Wheelpower National Junior Games at Stoke Mandeville last September and has been regularly training with the GB team since! Although up against some very experienced competitors, Melisa won 2 gold medals: R2 - Women Standing Rifle, Juniors Division R5 - Mixed Prone Rifle, Class A Fantastic news Melisa – you’re an absolute “shooting star”! Ms Day, Team Leader, PNI students

Girls Basketball Year 7/8 - AT Date: 16/03/2017 Opposition: Queens Result: 14 - 4 Team: L Roberts, M Hayes, B Lyall, C Wright, G De Venny, I Henry, S Parkhouse, E Zambarloukus, N Shestha, E Cannon Comment: The girls played their best game so far. They were benefitted by the experience of Mr Hawkins who had set up some formations before the game. The girls implemented this to a great standard. They worked hard up and down the court, their shooting let them down. The girls played a lot better than the scoreline suggests and even outscored their opposition in the last quarter. Well done girls! Player of match: B Lyall

Athletics News Congratulations to Charlie(08Elm) and Joe(07Oak) for finishing 1st and 3rd respectively in the Watford Junior Challenge. The event run by Watford Harriers took place last Saturday, 18 March, in Cassiobury Park. The race saw almost 100 athletes competing from all over the area over the 2.5K course and it was fantastic to see Bushey Meads students leading the way. Well done to all the other students who also took part.

GYMNASTICS â&#x20AC;&#x201C; Watford District Gymnastics Competition Mrs Cartledge, Teacher of PE On Friday 17th March 20 girls ranging from Years 7-11 took part in the Watford Schools Gymnastics Competition. The competition was divided into 3 categories. Level 1 was a beginnersâ&#x20AC;&#x2122; level, Level 2 was for the more experienced gymnast and Level 3 was for the gymnast who competes at regional level. Some of the schools attending included Haberdasher's, Watford Girls and St Clement Danes. All competitors had to perform a floor routine and 2 vaults. The event took place at the Dolphina Gymnastics Centre in Watford and gave the students the opportunity to participate at a top facility. The girls all performed fantastically well and were a credit to the school. Special mention must go to Team 2 in the level 2 competition for achieving silver overall. Well done to CJ Lea, Sophie Ward and Nicole Redmond. During the presentation artistry awards were given out for grace, musicality and control. Megan Sjollema was awarded one in Level 1 and Anouska Barrett was awarded one for best artistic gymnast of the whole competition. Vera Kutten was also awarded a dynamics award. Outstanding performers of the day were Zoe Picksley who came first in the individual competition and Anouska Barrett who was 2nd. The overall positions for all teams were as follows: Level 1 Team 1- Position - 6th Katie Smith Emma Smith Vera Kutten

Thanks to Mrs Maloney and Mrs Cooper for their help on the day and finally a massive thanks to all the girls for their commitment to this competition. They have put in endless hours of practice after school. Their behaviour was superb on the day and they should be proud of their achievements.

As part of their Year 8 curriculum learning, these students are learning about inspirational people, namely Jesus. To extend their learning and to make them think about the different people who inspire them every day in their lives, I asked them to produce a fourth plinth (at Trafalgar Square), of someone who inspires them to do better in their lives. As you can see from these pictures, the Year 8s pulled out all the stops to say how and why these different people - alive or dead - have inspired them. I was truly impressed with their hard work so wanted to share just a few examples of their work with you all. Well done Year 8 Religious Studies! Miss Walters â&#x20AC;&#x201C; Head of Religious Studies