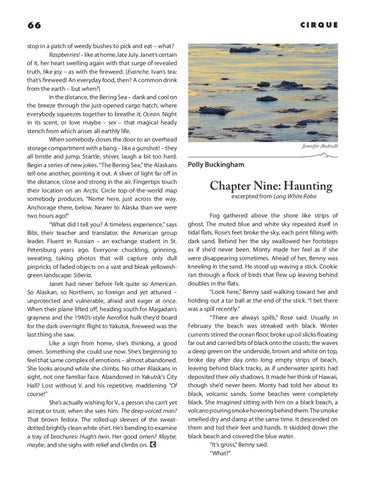 66 stop in a patch of weedy bushes to pick and eat – what? Raspberries! – like at home, late July. Janet’s certain of it, her heart swelling again with that surge of revealed truth, like joy – as with the fireweed. {Evanche, Ivan’s tea: that’s fireweed! An everyday food, then? A common drink from the earth – but when?} In the distance, the Bering Sea – dank and cool on the breeze through the just-opened cargo hatch, where everybody squeezes together to breathe it: Ocean. Night in its scent, or love maybe – sex – that magical heady stench from which arises all earthly life. When somebody closes the door to an overhead storage compartment with a bang – like a gunshot! – they all bristle and jump. Startle, shiver, laugh a bit too hard. Begin a series of new jokes. “The Bering Sea,” the Alaskans tell one another, pointing it out. A sliver of light far off in the distance, close and strong in the air. Fingertips touch their location on an Arctic Circle top-of-the-world map somebody produces. “Nome here, just across the way. Anchorage there, below. Nearer to Alaska than we were two hours ago!” “What did I tell you? A timeless experience,” says Bibi, their teacher and translator, the American group leader. Fluent in Russian – an exchange student in St. Petersburg years ago. Everyone chuckling, grinning, sweating, taking photos that will capture only dull pinpricks of faded objects on a vast and bleak yellowishgreen landscape: Siberia. Janet had never before felt quite so American. So Alaskan, so Northern, so foreign and yet attuned – unprotected and vulnerable, afraid and eager at once. When their plane lifted off, heading south for Magadan’s grayness and the 1940’s-style Aeroflot hulk they’d board for the dark overnight flight to Yakutsk, fireweed was the last thing she saw. Like a sign from home, she’s thinking, a good omen. Something she could use now. She’s beginning to feel that same complex of emotions – almost abandoned. She looks around while she climbs. No other Alaskans in sight, not one familiar face. Abandoned in Yakutsk’s City Hall? Lost without V. and his repetitive, maddening “Of course!” She’s actually wishing for V., a person she can’t yet accept or trust, when she sees him. The deep-voiced man? That brown fedora. The rolled-up sleeves of the sweatdotted brightly clean white shirt. He’s bending to examine a tray of brochures: Hugh’s twin. Her good omen? Maybe, maybe, and she sighs with relief and climbs on.

Fog gathered above the shore like strips of ghost. The muted blue and white sky repeated itself in tidal flats. Rose’s feet broke the sky, each print filling with dark sand. Behind her the sky swallowed her footsteps as if she’d never been. Monty made her feel as if she were disappearing sometimes. Ahead of her, Benny was kneeling in the sand. He stood up waving a stick. Cookie ran through a flock of birds that flew up leaving behind doubles in the flats. “Look here,” Benny said walking toward her and holding out a tar ball at the end of the stick. “I bet there was a spill recently.” “There are always spills,” Rose said. Usually in February the beach was streaked with black. Winter currents stirred the ocean floor, broke up oil slicks floating far out and carried bits of black onto the coasts; the waves a deep green on the underside, brown and white on top, broke day after day onto long empty strips of beach, leaving behind black tracks, as if underwater spirits had deposited their oily shadows. It made her think of Hawaii, though she’d never been. Monty had told her about its black, volcanic sands. Some beaches were completely black. She imagined sitting with him on a black beach, a volcano pouring smoke hovering behind them. The smoke smelled dry and damp at the same time. It descended on them and hid their feet and hands. It skidded down the black beach and covered the blue water. “It’s gross,” Benny said. “What?”