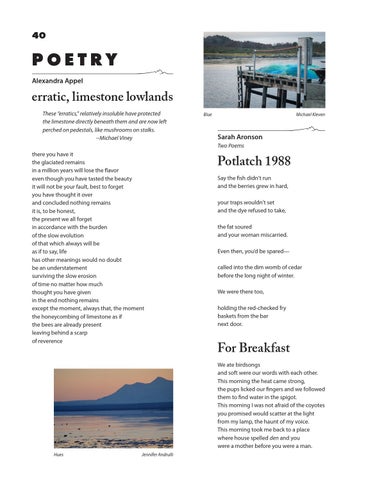 erratic, limestone lowlands These “erratics,” relatively insoluble have protected the limestone directly beneath them and are now left perched on pedestals, like mushrooms on stalks. --Michael Viney

there you have it the glaciated remains in a million years will lose the flavor even though you have tasted the beauty it will not be your fault, best to forget you have thought it over and concluded nothing remains it is, to be honest, the present we all forget in accordance with the burden of the slow evolution of that which always will be as if to say, life has other meanings would no doubt be an understatement surviving the slow erosion of time no matter how much thought you have given in the end nothing remains except the moment, always that, the moment the honeycombing of limestone as if the bees are already present leaving behind a scarp of reverence

Potlatch 1988 Say the fish didn’t run and the berries grew in hard, your traps wouldn’t set and the dye refused to take, the fat soured and your woman miscarried. Even then, you’d be spared— called into the dim womb of cedar before the long night of winter. We were there too, holding the red-checked fry baskets from the bar next door.

For Breakfast We ate birdsongs and soft were our words with each other. This morning the heat came strong, the pups licked our fingers and we followed them to find water in the spigot. This morning I was not afraid of the coyotes you promised would scatter at the light from my lamp, the haunt of my voice. This morning took me back to a place where house spelled den and you were a mother before you were a man.