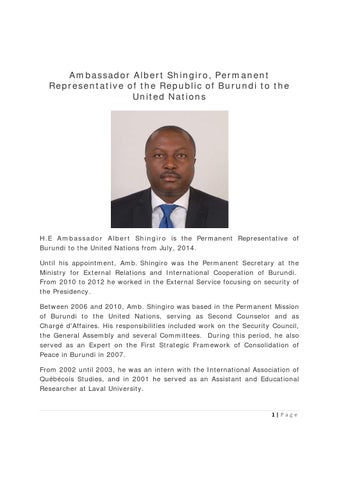 Ambassador Albert Shingiro, Permanent Representative of the Republic of Burundi to the United Nations

H.E Ambassador Albert Shingiro is the Permanent Representative of Burundi to the United Nations from July, 2014. Until his appointment, Amb. Shingiro was the Permanent Secretary at the Ministry for External Relations and International Cooperation of Burundi. From 2010 to 2012 he worked in the External Service focusing on security of the Presidency. Between 2006 and 2010, Amb. Shingiro was based in the Permanent Mission of Burundi to the United Nations, serving as Second Counselor and as Chargé d&#39;Affaires. His responsibilities included work on the Security Council, the General Assembly and several Committees. During this period, he also served as an Expert on the First Strategic Framework of Consolidation of Peace in Burundi in 2007. From 2002 until 2003, he was an intern with the International Association of Québécois Studies, and in 2001 he served as an Assistant and Educational Researcher at Laval University.