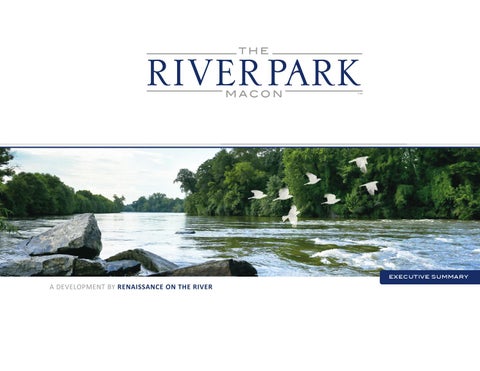 A DEVELOPMENT BY RENAISSANCE ON THE RIVER

The River Park Macon Project will be a mixed-use development with a potential fair market value in excess of $90,000,000 consisting of

Class A medical building with a cumulative area in excess of 120,000 square feet;

Multiple Class A medical/oďŹ&amp;#x192;ce building with a cumulative area in excess of 120,000 square feet;

A luxurious condominium tower (two- and three-bedroom layouts); and

A condo/apartment complex (150 to 200 doors) with secured parking and retail shops on the ground level.

The oďŹ&amp;#x192;ce buildings, the hotel, the condominium complex, and the apartment complex will be purpose built and built to suit. In addition, a portion of the funds generated by taxes levied within a tax allocation district will be used to construct a multi-story parking deck with capacity designed to meet or exceed even the most demanding of enterprises.

The is situated in the Central Business District of Macon, Georgia (Downtown Macon). The site lies within 500 feet of one of the city’s most heavily traveled intersections—Spring Street and Riverside Drive— and enjoys excellent access to Interstates 16 and 75. Adjacent properties are developed and include professional and private business oﬃces, restaurant chains, convenience and gasoline stations, and a handsomely landscaped green space known as Rotary Park. The Ocmulgee River ﬂows along the northeastern border of the site. Macon has abundant and high quality water resources, and in 2012 the Macon Water Authority was one of only four systems in the United States to receive the Gold Award for “Exceptional Utility Performance” from the Association of Metropolitan Water Agencies.

All images, photographs, ﬂoor plans, amenities, etc. are for illustration purposes only and do not necessary represent ﬁnal designs.

In December 2010, the Macon City Council and the Mayor approved the creation of the Renaissance on the River Tax Allocation District (TAD) covering the project site. It is expected that bonds will be issued by the Consolidated Government of the City of Macon and Bibb County (Macon-Bibb County)

secured by taxes levied within the TAD. A portion of the bond proceeds will be used to ďŹ nance public infrastructure improvements on the site, including roads and water, wastewater, storm water, and parking facilities, all suďŹ&amp;#x192;cient to support the proposed mixed-use development.

the City of Macon is situated in the center of the State of Georgia 85 miles south of Atlanta and serves as the intersection of two major interstate highways connecting Middle Georgia to Coastal Georgia and the ports of Savannah and Brunswick. After voters approved the consolidation of the City of Macon and Bibb County in 2012, Macon-Bibb County became Georgia’s fourth largest municipality, with a population of more than 155,000 based on 2010 U.S. Census Bureau ﬁgures. Macon’s economy beneﬁts from large employers such as the Medical Center of Central Georgia (MCCG), Mercer University, GEICO’s largest regional oﬃce, a Boeing Company assembly plant, and a YKK Corporation manufacturing center.

Macon is home to three, four-year, post-secondary institutions—Mercer University, Middle Georgia State College, and Wesleyan College. In addition, Central Georgia Technical College is located in Macon and according to 2012 ﬁgures, boasts Georgia’s ﬁfth largest enrollment in technical colleges. Macon also enjoys a comprehensive system of public and private primary and secondary schools. Macon supports two major hospital systems: the Medical Center of Central Georgia (MCCG) and Coliseum Health System. MCCG houses more than 630 beds and is the only designated Level 1 Trauma Center in Middle Georgia. MCCG also serves as the primary teaching hospital for the Mercer University School of Medicine. Coliseum is a three-hospital system with more than 350 beds. Both hospital systems are located within one mile of the River Park project site.

Demographics within a three-mile radius of the project site include approximately 3,000 businesses, 15,000 employees, and a residential population of nearly 44,000. macon-bibb county: