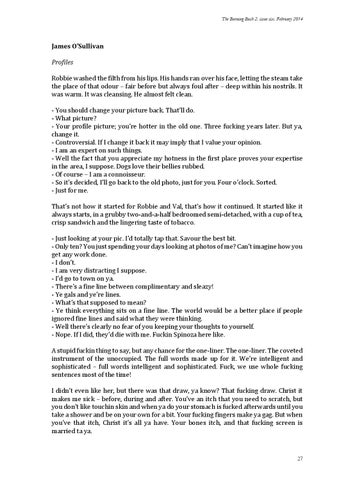 James O’Sullivan Profiles Robbie washed the filth from his lips. His hands ran over his face, letting the steam take the place of that odour – fair before but always foul after – deep within his nostrils. It was warm. It was cleansing. He almost felt clean. - You should change your picture back. That’ll do. - What picture? - Your profile picture; you’re hotter in the old one. Three fucking years later. But ya, change it. - Controversial. If I change it back it may imply that I value your opinion. - I am an expert on such things. - Well the fact that you appreciate my hotness in the first place proves your expertise in the area, I suppose. Dogs love their bellies rubbed. - Of course – I am a connoisseur. - So it’s decided, I’ll go back to the old photo, just for you. Four o’clock. Sorted. - Just for me. That’s not how it started for Robbie and Val, that’s how it continued. It started like it always starts, in a grubby two-and-a-half bedroomed semi-detached, with a cup of tea, crisp sandwich and the lingering taste of tobacco. - Just looking at your pic. I’d totally tap that. Savour the best bit. - Only ten? You just spending your days looking at photos of me? Can’t imagine how you get any work done. - I don’t. - I am very distracting I suppose. - I’d go to town on ya. - There’s a fine line between complimentary and sleazy! - Ye gals and ye’re lines. - What’s that supposed to mean? - Ye think everything sits on a fine line. The world would be a better place if people ignored fine lines and said what they were thinking. - Well there’s clearly no fear of you keeping your thoughts to yourself. - Nope. If I did, they’d die with me. Fuckin Spinoza here like. A stupid fuckin thing to say, but any chance for the one-liner. The one-liner. The coveted instrument of the unoccupied. The full words made up for it. We’re intelligent and sophisticated – full words intelligent and sophisticated. Fuck, we use whole fucking sentences most of the time! I didn’t even like her, but there was that draw, ya know? That fucking draw. Christ it makes me sick – before, during and after. You’ve an itch that you need to scratch, but you don’t like touchin skin and when ya do your stomach is fucked afterwards until you take a shower and be on your own for a bit. Your fucking fingers make ya gag. But when you’ve that itch, Christ it’s all ya have. Your bones itch, and that fucking screen is married ta ya. 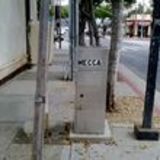