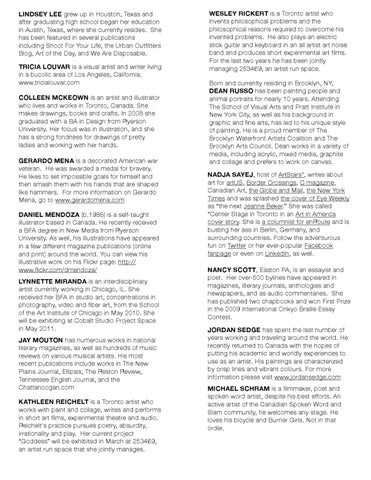 LINDSEY LEE grew up in Houston, Texas and after graduating high school began her education in Austin, Texas, where she currently resides.# She has been featured in several publications including Shoot For Your Life, the Urban Outfitters Blog, Art of the Day, and We Are Disposable.# #### TRICIA LOUVAR is a visual artist and writer living in a bucolic area of Los Angeles, California. # www.tricialouvar.com COLLEEN MCKEOWN is an artist and illustrator who lives and works in Toronto, Canada. She makes drawings, books and crafts. In 2008 she graduated with a BA in Design from Ryerson University. Her focus was in illustration, and she has a strong fondness for drawings of pretty ladies and working with her hands. GERARDO MENA is a decorated American war veteran.# He was awarded a medal for bravery.# He likes to set impossible goals for himself and then smash them with his hands that are shaped like hammers.# For more information on Gerardo Mena, go to www.gerardomena.com DANIEL MENDOZA (b.1988) is a self-taught illustrator based in Canada. He recently received a BFA degree in New Media from Ryerson University. As well, his illustrations have appeared in a few different magazine publications (online and print) around the world. You can view his illustrative work on his Flickr page: http:// www.flickr.com/dmendoza/ LYNNETTE MIRANDA is an interdisciplinary artist currently working in Chicago, IL. She received her BFA in studio art, concentrations in photography, video and fiber art, from the School of the Art Institute of Chicago in May 2010. She will be exhibiting at Cobalt Studio Project Space in May 2011. JAY MOUTON has#numerous works in national literary magazines, as well as hundreds of music reviews on various musical artists. His most recent publications include works in The New Plains Journal, Ellipsis, The Reston Review, Tennessee English Journal, and the Chattanoogan.com KATHLEEN REICHELT is a Toronto artist who works with paint and collage, writes and performs in short art films, experimental theatre and audio.# Reichelt&#39;s practice pursues poetry, absurdity, irrationality and play.# Her current project “Goddess” will be exhibited in March at 253469, an artist run space that she jointly manages.

WESLEY RICKERT is a Toronto artist who invents philosophical problems and the philosophical reasons required to overcome his invented problems.# He also plays an electric stick guitar and keyboard in an all artist art noise band and produces short experimental art films. For the last two years he has been jointly managing 253469, an artist run space. Born and currently residing in Brooklyn, NY, DEAN RUSSO has been painting people and animal portraits for nearly 10 years. Attending The School of Visual Arts and Pratt Institute in New York City, as well as his background in graphic and fine arts, has led to his unique style of painting. He is a proud member of The Brooklyn Waterfront Artists Coalition and The Brooklyn Arts Council.#Dean works in a variety of media, including acrylic, mixed media, graphite and collage and prefers to work on canvas.# NADJA SAYEJ, host of ArtStars*, writes about art for artUS, Border Crossings, C magazine, Canadian Art, the Globe and Mail, the New York Times and was splashed the cover of Eye Weekly as “the next Jeanne Beker.” She was called “Center Stage in Toronto in an Art in America cover story. She is a columnist for enRoute and is busting her ass in Berlin, Germany, and surrounding countries. Follow the adventurous fun on Twitter or her ever-popular Facebook fanpage or even on LinkedIn, as well. NANCY SCOTT, Easton PA, is an essayist and poet. Her over-500 bylines have appeared in magazines, literary journals, anthologies and newspapers, and as audio commentaries. She has published two chapbooks and won First Prize in the 2009 International Onkyo Braille Essay Contest. JORDAN SEDGE#has spent#the last number of years#working and traveling around the world. He recently returned to Canada with the hopes of putting his academic and worldly experiences to use as an artist. His paintings are characterized by crisp lines and vibrant colours. For more information please visit www.jordansedge.com# MICHAEL SCHRAM is a filmmaker, poet and spoken word artist, despite his best efforts. An active artist of the Canadian Spoken Word and Slam community, he welcomes any stage. He loves his bicycle and Burner Girls. Not in that order. 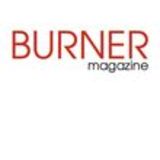