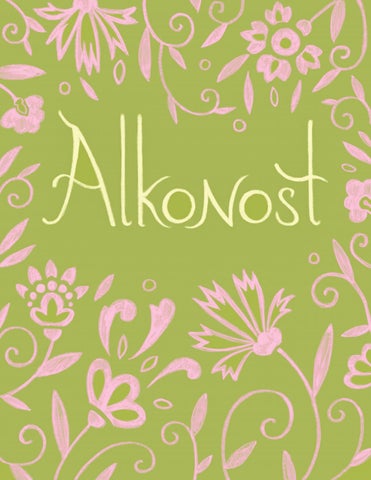 Dasha Burobina is an illustrator from Russia. She is a senior student at the Maryland Institute College of Art, and the collection presented in this book is a part of her senior thesis. Growing up in Russia, she was inspired by the Slavic culture, represented in the old tailes, textiles and history. And it is astonishing to her how well this culture was preserved over the thousands of years. Dashaâ&amp;#x20AC;&amp;#x2122;s goal was to create a collection that will educate and inspire others along with bringing people the joy of the gift. Alkonost is a collection inspired by Slavic mythology. The chosen items are composing a gift kit, where each item is devoted to a creature or attribute from Slavic folklore. Each piece is holding an ancient story within. Alkonost is not only a great and useful, but educational gift brand.

Alkonost Alkonost is an old mythological creature, that is described as having a head of the woman and a body of the bird. Slavic Alkonost is a bird of paradise with a wonderfully sweet and euphonious voice. It lays eggs on the seashore, then plunges them into the sea - and the waves calm down for a week. When the eggs hatch, a storm begins. In the Orthodox tradition, Alkonost is considered a divine messenger - it lives in heaven and descends to convey the higher will to people.

A little bit of a process. It has all started with experiments with color and shapes. Some of theses patterns did not make it to the final collection.

Rusalkas Rusalkas or Mermaids are the creatures that could be found in many cultureâ&amp;#x20AC;&amp;#x2122;s folklore.In Slavic mythology, mermaids are a kind of mischievous evil spirits.They were drowned women, girls who died near a reservoir, or people bathing at an inappropriate time.The eyes

of such mermaids burn with green fire.By their nature, they are nasty and evil creatures, they grab the swimmers by the legs, pull them under the water, or lure them from the shore, wrap their arms around them and drown them.

Rejuvenating apples The rejuvenating apple is the subject of Slavic fairy tales, which makes the one who eats it young. This way the characters of the tales can live forever. The apple tree is usually guarded by the creatures, so only the bravest ones can make it to through.

Gamaun Like Alkonost, Gamaun is the divine woman-bird, whose main function is to make predictions. The saying â&amp;#x20AC;&amp;#x153;Gamayun is a prophetic birdâ&amp;#x20AC;? is well known. It also knew how to control the weather. It was believed that when Gamayun flies from the side of sunrise, a storm comes after it.

Firebird Firebird is mystical bird with bright, blinding fiery feathers (â&amp;#x20AC;&amp;#x2DC;like the heat burnsâ&amp;#x20AC;&amp;#x2122;). A traditional test for fairy-tale heroes is to get a feather from the tail of this bird. The Firebird was more like a metaphor symbolizing challange. It also personifies fire, light, sun, possibly knowledge. Its closest relative is the medieval Phoenix bird, known both in the West and in Russia.

Zmei Gorynych Zmei Gorynych is a character of Slavic folk tales and epics, represented by a fire-breathing dragon with several heads. According to legends, Gorynych lives near the kingdom of the dead, guarding the main entrance. It has several heads, usually three, but there are references to six and nine heads. It can travel both on the ground and in the air. It is depicted as an evil character with a long body covered with scales, clawed paws and a powerful tail. People are frightened not so much by the appearance of the villain as by its ability to spew flame. Fire bursts out of the mouth at the onset of danger. A distinctive feature of the character is the regeneration of lost heads.

Izbushka Izbushka na kurih nozhkah is a magical hut set on chicken legs and is a home for Baba Yaga. A stupa(wooden human-size cup) and a broom are Baba Yagaâ&amp;#x20AC;&amp;#x2122;s main means of transportation. A black cat and different mushrooms

are all common things you can find in the Izbushka. Baba Yaga uses mushrooms to create her potions, and usually uses cat or a crow as helpers.

Alkonost is a senior thesis project - a collection of products inspired by the Slavic mythology and gathered into a gift kit. Created and designed by Dasha Burobina.