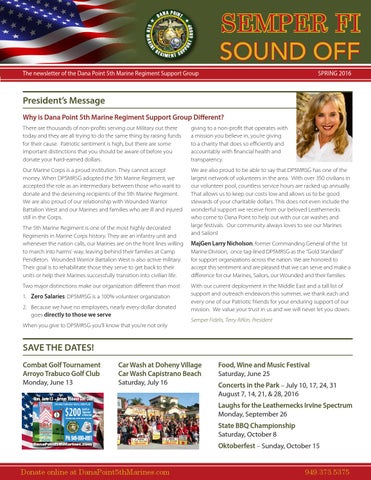 President’s Message Why is Dana Point 5th Marine Regiment Support Group Different? There are thousands of non-profits serving our Military out there today and they are all trying to do the same thing by raising funds for their cause. Patriotic sentiment is high, but there are some important distinctions that you should be aware of before you donate your hard-earned dollars.

giving to a non-profit that operates with a mission you believe in, you’re giving to a charity that does so efficiently and accountably with financial health and transparency.

Our Marine Corps is a proud institution. They cannot accept money. When DP5MRSG adopted the 5th Marine Regiment, we accepted the role as an intermediary between those who want to donate and the deserving recipients of the 5th Marine Regiment. We are also proud of our relationship with Wounded Warrior Battalion West and our Marines and families who are ill and injured still in the Corps.

We are also proud to be able to say that DP5MRSG has one of the largest network of volunteers in the area. With over 350 civilians in our volunteer pool, countless service hours are racked up annually. That allows us to keep our costs low and allows us to be good stewards of your charitable dollars. This does not even include the wonderful support we receive from our beloved Leathernecks who come to Dana Point to help out with our car washes and large festivals. Our community always loves to see our Marines and Sailors!

The 5th Marine Regiment is one of the most highly decorated Regiments in Marine Corps history. They are an infantry unit and whenever the nation calls, our Marines are on the front lines willing to march into harms’ way, leaving behind their families at Camp Pendleton. Wounded Warrior Battalion West is also active military. Their goal is to rehabilitate those they serve to get back to their units or help their Marines successfully transition into civilian life. Two major distinctions make our organization different than most 1. Zero Salaries: DP5MRSG is a 100% volunteer organization 2. Because we have no employees, nearly every dollar donated goes directly to those we serve When you give to DP5MRSG you’ll know that you’re not only

MajGen Larry Nicholson, former Commanding General of the 1st Marine Division, once tag-lined DP5MRSG as the “Gold Standard” for support organizations across the nation. We are honored to accept this sentiment and are pleased that we can serve and make a difference for our Marines, Sailors, our Wounded and their families. With our current deployment in the Middle East and a tall list of support and outreach endeavors this summer, we thank each and every one of our Patriotic friends for your enduring support of our mission. We value your trust in us and we will never let you down. Semper Fidelis, Terry Rifkin, President

The official Spring 2016 newsletter of the Dana Point 5th Marine Regiment Support Group - Semper Fi Sound Off Here are the headlines from this issue: PRESIDENT'S MESSAGE: Why is Dana Point 5th Marine Regiment Support Group Different? Help our American Heroes – You can make a difference! Lessons Beyond the Classroom From the Command Post - Colonel Ken Kassner Purple Heart Memorial Monument Wouldn’t you like to Adopt a Marine? Learn more at at DanaPoint5thMarines.com