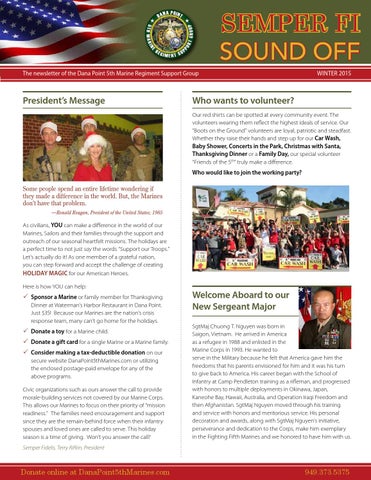 Who wants to volunteer? Our red shirts can be spotted at every community event. The volunteers wearing them reflect the highest ideals of service. Our “Boots on the Ground” volunteers are loyal, patriotic and steadfast. Whether they raise their hands and step up for our Car Wash, Baby Shower, Concerts in the Park, Christmas with Santa, Thanksgiving Dinner or a Family Day, our special volunteer “Friends of the 5th” truly make a difference. Who would like to join the working party?

Some people spend an entire lifetime wondering if they made a difference in the world. But, the Marines don’t have that problem. —Ronald Reagan, President of the United States; 1985

As civilians, YOU can make a difference in the world of our Marines, Sailors and their families through the support and outreach of our seasonal heartfelt missions. The holidays are a perfect time to not just say the words “Support our Troops.” Let’s actually do it! As one member of a grateful nation, you can step forward and accept the challenge of creating HOLIDAY MAGIC for our American Heroes. Here is how YOU can help:

P Sponsor a Marine or family member for Thanksgiving Dinner at Waterman’s Harbor Restaurant in Dana Point. Just $35! Because our Marines are the nation’s crisis response team, many can’t go home for the holidays.

P Donate a toy for a Marine child. P Donate a gift card for a single Marine or a Marine family. P Consider making a tax-deductible donation on our secure website DanaPoint5thMarines.com or utilizing the enclosed postage-paid envelope for any of the above programs. Civic organizations such as ours answer the call to provide morale-building services not covered by our Marine Corps. This allows our Marines to focus on their priority of “mission readiness.” The families need encouragement and support since they are the remain-behind force when their infantry spouses and loved ones are called to serve. This holiday season is a time of giving. Won’t you answer the call?

Welcome Aboard to our New Sergeant Major SgtMaj Chuong T. Nguyen was born in Saigon, Vietnam. He arrived in America as a refugee in 1988 and enlisted in the Marine Corps in 1993. He wanted to serve in the Military because he felt that America gave him the freedoms that his parents envisioned for him and it was his turn to give back to America. His career began with the School of Infantry at Camp Pendleton training as a rifleman, and progressed with honors to multiple deployments in Okinawa, Japan, Kaneohe Bay, Hawaii, Australia, and Operation Iraqi Freedom and then Afghanistan. SgtMaj Nguyen moved through his training and service with honors and meritorious service. His personal decoration and awards, along with SgtMaj Nguyen’s initiative, perseverance and dedication to the Corps, make him exemplary in the Fighting Fifth Marines and we honored to have him with us.