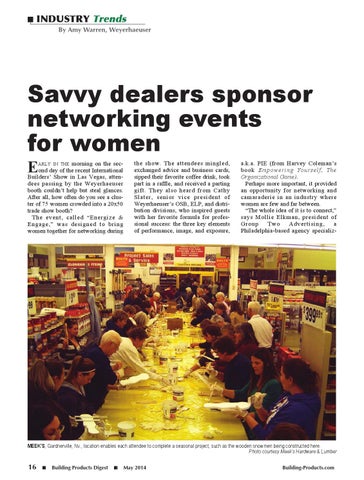 ARLY IN THE morning on the second day of the recent International Builders’ Show in Las Vegas, attendees passing by the Weyerhaeuser booth couldn’t help but steal glances. After all, how often do you see a cluster of 75 women crowded into a 20x50 trade show booth? The event, called “Energize & Engage,” was designed to bring women together for networking during

the show. The attendees mingled, exchanged advice and business cards, sipped their favorite coffee drink, took part in a raffle, and received a parting gift. They also heard from Cathy Slater, senior vice president of Weyerhaeuser’s OSB, ELP, and distribution divisions, who inspired guests with her favorite formula for professional success: the three key elements of performance, image, and exposure,

a.k.a. PIE (from Harvey Coleman’s book Empowering Yourself, The Organizational Game). Perhaps more important, it provided an opportunity for networking and camaraderie in an industry where women are few and far between. “The whole idea of it is to connect,” says Mollie Elkman, president of Group Two Advertising, a Philadelphia-based agency specializ-