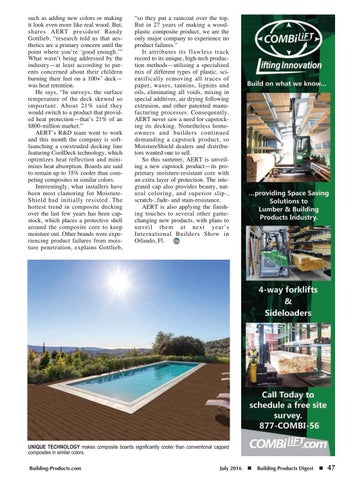 such as adding new colors or making it look even more like real wood. But, shares AERT president Randy Gottlieb, “research told us that aesthetics are a primary concern until the point where you’re ‘good enough.’” What wasn’t being addressed by the industry—at least according to parents concerned about their children burning their feet on a 100+˚ deck— was heat retention. He says, “In surveys, the surface temperature of the deck skewed so important. About 21% said they would switch to a product that provided heat protection—that’s 21% of an $800-million market.” AERT’s R&D team went to work and this month the company is softlaunching a coextruded decking line featuring CoolDeck technology, which optimizes heat reflection and minimizes heat absorption. Boards are said to remain up to 35% cooler than competing composites in similar colors. Interestingly, what installers have been most clamoring for MoistureShield had initially resisted. The hottest trend in composite decking over the last few years has been capstock, which places a protective shell around the composite core to keep moisture out. Other brands were experiencing product failures from moisture penetration, explains Gottlieb,

“so they put a raincoat over the top. But in 27 years of making a woodplastic composite product, we are the only major company to experience no product failures.” It attributes its flawless track record to its unique, high-tech production methods—utilizing a specialized mix of different types of plastic, scientifically removing all traces of paper, waxes, tannins, lignins and oils, eliminating all voids, mixing in special additives, air drying following extrusion, and other patented manufacturing processes. Consequently, AERT never saw a need for capstocking its decking. Nonetheless homeowners and builders continued demanding a capstock product, so MoistureShield dealers and distributors wanted one to sell. So this summer, AERT is unveiling a new capstock product—its proprietary moisture-resistant core with an extra layer of protection. The integrated cap also provides beauty, natural coloring, and superior slip-, scratch-, fade- and stain-resistance. AERT is also applying the finishing touches to several other gamechanging new products, with plans to unveil them at next year’s International Builders Show in Orlando, Fl.