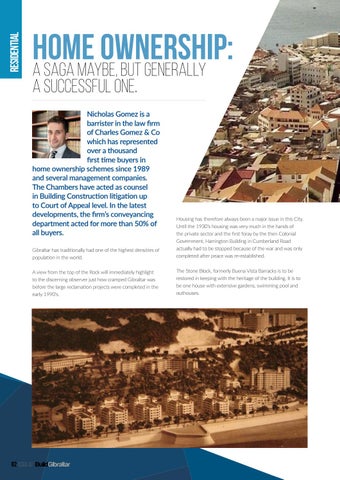 Home Ownership: A saga maybe, but generally a successful one.

Nicholas Gomez is a barrister in the law firm of Charles Gomez &amp; Co which has represented over a thousand first time buyers in home ownership schemes since 1989 and several management companies. The Chambers have acted as counsel in Building Construction litigation up to Court of Appeal level. In the latest developments, the firm’s conveyancing department acted for more than 50% of all buyers. Gibraltar has traditionally had one of the highest densities of population in the world.

Housing has therefore always been a major issue in this City. Until the 1930’s housing was very much in the hands of the private sector and the first foray by the then Colonial Government, Harrington Building in Cumberland Road actually had to be stopped because of the war and was only completed after peace was re-established.

A view from the top of the Rock will immediately highlight to the discerning observer just how cramped Gibraltar was before the large reclamation projects were completed in the early 1990’s.

The Stone Block, formerly Buena Vista Barracks is to be restored in keeping with the heritage of the building. It is to be one house with extensive gardens, swimming pool and outhouses.