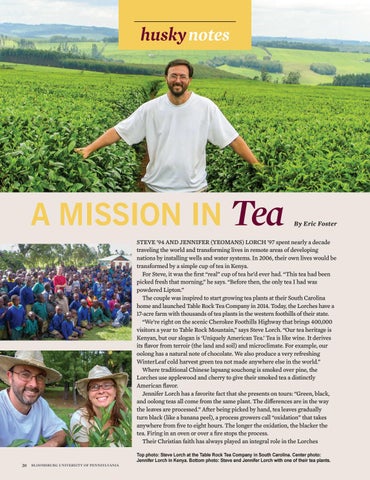 A MISSION IN Tea

STEVE ’94 AND JENNIFER (YEOMANS) LORCH ’97 spent nearly a decade traveling the world and transforming lives in remote areas of developing nations by installing wells and water systems. In 2006, their own lives would be transformed by a simple cup of tea in Kenya. For Steve, it was the first “real” cup of tea he’d ever had. “This tea had been picked fresh that morning,” he says. “Before then, the only tea I had was powdered Lipton.” The couple was inspired to start growing tea plants at their South Carolina home and launched Table Rock Tea Company in 2014. Today, the Lorches have a 17-acre farm with thousands of tea plants in the western foothills of their state. “We’re right on the scenic Cherokee Foothills Highway that brings 400,000 visitors a year to Table Rock Mountain,” says Steve Lorch. “Our tea heritage is Kenyan, but our slogan is ‘Uniquely American Tea.’ Tea is like wine. It derives its flavor from terroir (the land and soil) and microclimate. For example, our oolong has a natural note of chocolate. We also produce a very refreshing WinterLeaf cold harvest green tea not made anywhere else in the world.” Where traditional Chinese lapsang souchong is smoked over pine, the Lorches use applewood and cherry to give their smoked tea a distinctly American flavor. Jennifer Lorch has a favorite fact that she presents on tours: “Green, black, and oolong teas all come from the same plant. The differences are in the way the leaves are processed.” After being picked by hand, tea leaves gradually turn black (like a banana peel), a process growers call “oxidation” that takes anywhere from five to eight hours. The longer the oxidation, the blacker the tea. Firing in an oven or over a fire stops the process. Their Christian faith has always played an integral role in the Lorches