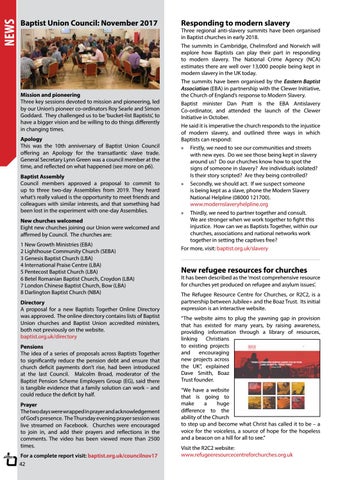 Mission and pioneering Three key sessions devoted to mission and pioneering, led by our Union’s pioneer co-ordinators Roy Searle and Simon Goddard. They challenged us to be ‘bucket-list Baptists’, to have a bigger vision and be willing to do things differently in changing times. Apology This was the 10th anniversary of Baptist Union Council offering an Apology for the transatlantic slave trade. General Secretary Lynn Green was a council member at the time, and reflected on what happened (see more on p6). Baptist Assembly Council members approved a proposal to commit to up to three two-day Assemblies from 2019. They heard what’s really valued is the opportunity to meet friends and colleagues with similar interests, and that something had been lost in the experiment with one-day Assemblies. New churches welcomed Eight new churches joining our Union were welcomed and affirmed by Council. The churches are: 1 New Growth Ministries (EBA) 2 Lighthouse Community Church (SEBA) 3 Genesis Baptist Church (LBA) 4 International Praise Centre (LBA) 5 Pentecost Baptist Church (LBA) 6 Betel Romanian Baptist Church, Croydon (LBA) 7 London Chinese Baptist Church, Bow (LBA) 8 Darlington Baptist Church (NBA) Directory A proposal for a new Baptists Together Online Directory was approved. The online directory contains lists of Baptist Union churches and Baptist Union accredited ministers, both not previously on the website. baptist.org.uk/directory Pensions The idea of a series of proposals across Baptists Together to significantly reduce the pension debt and ensure that church deficit payments don’t rise, had been introduced at the last Council. Malcolm Broad, moderator of the Baptist Pension Scheme Employers Group (EG), said there is tangible evidence that a family solution can work – and could reduce the deficit by half. Prayer The two days were wrapped in prayer and acknowledgement of God’s presence. The Thursday evening prayer session was live streamed on Facebook. Churches were encouraged to join in, and add their prayers and reflections in the comments. The video has been viewed more than 2500 times. For a complete report visit: baptist.org.uk/councilnov17 42

Three regional anti-slavery summits have been organised in Baptist churches in early 2018. The summits in Cambridge, Chelmsford and Norwich will explore how Baptists can play their part in responding to modern slavery. The National Crime Agency (NCA) estimates there are well over 13,000 people being kept in modern slavery in the UK today. The summits have been organised by the Eastern Baptist Association (EBA) in partnership with the Clewer Initiative, the Church of England’s response to Modern Slavery. Baptist minister Dan Pratt is the EBA Antislavery Co-ordinator, and attended the launch of the Clewer Initiative in October. He said it is imperative the church responds to the injustice of modern slavery, and outlined three ways in which Baptists can respond: »» Firstly, we need to see our communities and streets with new eyes. Do we see those being kept in slavery around us? Do our churches know how to spot the signs of someone in slavery? Are individuals isolated? Is their story scripted? Are they being controlled? »» Secondly, we should act. If we suspect someone is being kept as a slave, phone the Modern Slavery National Helpline (08000 121700). www.modernslaveryhelpline.org »» Thirdly, we need to partner together and consult. We are stronger when we work together to fight this injustice. How can we as Baptists Together, within our churches, associations and national networks work together in setting the captives free? For more, visit: baptist.org.uk/slavery

It has been described as the ‘most comprehensive resource for churches yet produced on refugee and asylum issues’. The Refugee Resource Centre for Churches, or R2C2, is a partnership between Jubilee+ and the Boaz Trust. Its initial expression is an interactive website. “The website aims to plug the yawning gap in provision that has existed for many years, by raising awareness, providing information through a library of resources, linking Christians to existing projects and encouraging new projects across the UK”, explained Dave Smith, Boaz Trust founder. “We have a website that is going to make a huge difference to the ability of the Church to step up and become what Christ has called it to be – a voice for the voiceless, a source of hope for the hopeless and a beacon on a hill for all to see.” Visit the R2C2 website: www.refugeeresourcecentreforchurches.org.uk 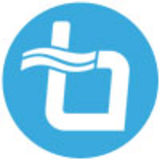 The magazine for Baptist Churches from the Baptist Union of GB

The magazine for Baptist Churches from the Baptist Union of GB