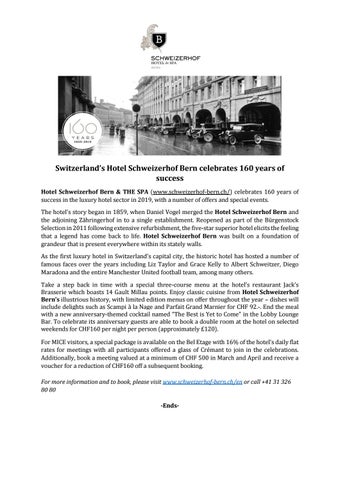 Switzerland’s Hotel Schweizerhof Bern celebrates 160 years of success Hotel Schweizerhof Bern &amp; THE SPA (www.schweizerhof-bern.ch/) celebrates 160 years of success in the luxury hotel sector in 2019, with a number of offers and special events. The hotel’s story began in 1859, when Daniel Vogel merged the Hotel Schweizerhof Bern and the adjoining Zähringerhof in to a single establishment. Reopened as part of the Bürgenstock Selection in 2011 following extensive refurbishment, the five-star superior hotel elicits the feeling that a legend has come back to life. Hotel Schweizerhof Bern was built on a foundation of grandeur that is present everywhere within its stately walls. As the first luxury hotel in Switzerland’s capital city, the historic hotel has hosted a number of famous faces over the years including Liz Taylor and Grace Kelly to Albert Schweitzer, Diego Maradona and the entire Manchester United football team, among many others. Take a step back in time with a special three-course menu at the hotel’s restaurant Jack’s Brasserie which boasts 14 Gault Millau points. Enjoy classic cuisine from Hotel Schweizerhof Bern’s illustrious history, with limited edition menus on offer throughout the year – dishes will include delights such as Scampi à la Nage and Parfait Grand Marnier for CHF 92.-. End the meal with a new anniversary-themed cocktail named “The Best is Yet to Come” in the Lobby Lounge Bar. To celebrate its anniversary guests are able to book a double room at the hotel on selected weekends for CHF160 per night per person (approximately £120). For MICE visitors, a special package is available on the Bel Etage with 16% of the hotel’s daily flat rates for meetings with all participants offered a glass of Crémant to join in the celebrations. Additionally, book a meeting valued at a minimum of CHF 500 in March and April and receive a voucher for a reduction of CHF160 off a subsequent booking. For more information and to book, please visit www.schweizerhof-bern.ch/en or call +41 31 326 80 80 -Ends-

Notes to Editors For further information or photography, please contact Sarah Maxwell at The Dovetail Agency on +44 (0)20 3709 7809 or sarah@dovetail-agency.co.uk.