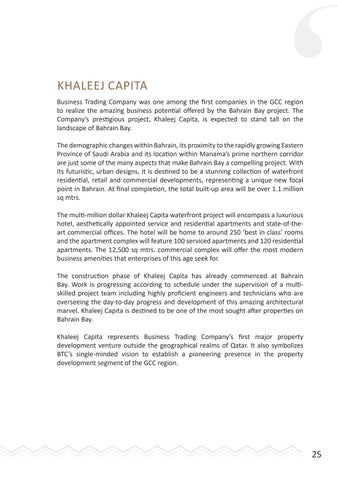 KHALEEJ CAPITA Business Trading Company was one among the first companies in the GCC region to realize the amazing business potential offered by the Bahrain Bay project. The Company’s prestigious project, Khaleej Capita, is expected to stand tall on the landscape of Bahrain Bay. The demographic changes within Bahrain, its proximity to the rapidly growing Eastern Province of Saudi Arabia and its location within Manama’s prime northern corridor are just some of the many aspects that make Bahrain Bay a compelling project. With its futuristic, urban designs, it is destined to be a stunning collection of waterfront residential, retail and commercial developments, representing a unique new focal point in Bahrain. At final completion, the total built-up area will be over 1.1 million sq mtrs. The multi-million dollar Khaleej Capita waterfront project will encompass a luxurious hotel, aesthetically appointed service and residential apartments and state-of-theart commercial offices. The hotel will be home to around 250 ‘best in class’ rooms and the apartment complex will feature 100 serviced apartments and 120 residential apartments. The 12,500 sq mtrs. commercial complex will offer the most modern business amenities that enterprises of this age seek for. The construction phase of Khaleej Capita has already commenced at Bahrain Bay. Work is progressing according to schedule under the supervision of a multiskilled project team including highly proficient engineers and technicians who are overseeing the day-to-day progress and development of this amazing architectural marvel. Khaleej Capita is destined to be one of the most sought after properties on Bahrain Bay. Khaleej Capita represents Business Trading Company’s first major property development venture outside the geographical realms of Qatar. It also symbolizes BTC’s single-minded vision to establish a pioneering presence in the property development segment of the GCC region.