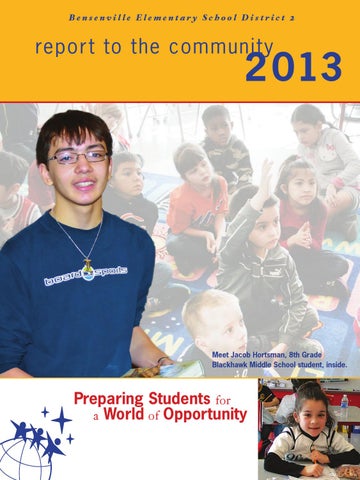 repor t to the community

Preparing Students for a World of Opportunity

An early adopter to Common Core District 2 is setting the example in implementing the Common Core State Standards, presenting our work at state and national conferences. Our district staff is setting the example of how to ‘unpack’ the new standards and develop new curriculum that will make students successful in a changing global society. The changes are currently focused on English Language Arts and Mathematics. District 2 began implementing the Common Core State Standards in 2011-12. The new standards represent a big shift for U.S. education, emphasizing college and career readiness. Many refer to this change as education “reinvention” instead of “reform.”

Why change is so important Employees must now know how to solve more complex problems more quickly and think creatively if they are to add value to virtually any business, no matter what size. • For the first time in this country, the skills required to be successful in college are exactly the same as those required to be successful in the work force. In addition to basic skills, college and business leaders now demand collaboration, problem solving, and critical thinking skills from all employees. • Our educational system did not fail; it worked quite well for the social and economic context of the time; however, that context changed significantly. Today a quality education is less about coverage of materials and much more about the mastery of core skills. -- Dr. Kay Dugan, Assistant Superintendent for Learning Dr. Kay Dugan is co-chair of the Educator Leadership Cadre, which is working to ensure districts across the state are transitioning to the Common Core and a project manager with Partnership for Assessment of Readiness for College and Careers (PARCC)–the group creating the new student assessment system for 24 states.

“The Common Core has shifted our practice to focusing on preparing our students for their future and making sure they leave our classrooms with deep understanding and not just coverage of content. We’re teaching our students skills that they can apply to any topic in the real world, not just what was previously covered in the text books.”

For more on District 2 and the Common Core, go to www.bsd2.org/commoncore

A state and national partner in school reform District 2 is one of two Race To The Top school districts in DuPage County and one of 35 statewide. Participation demonstrates that the district is a leader in education reform aimed at improving student achievement for the entire state. By participating in Race to the Top, the district is blazing the trail in: • Implementing the new standards in the classroom, • Developing evaluation tools for retaining highly effective teachers and principals • Building a data system to measure student success • Setting an example for districts across the state.

All three District 2 schools have received upgraded access to the internet with fiber optic cable that provides 30 times more band width. Additional capacity will be added this summer. This allows teachers and students to access more from the internet, including video streams and sophisticated applications like Google Earth. More than 500 iPads have been deployed to the schools, each new elementary classroom received three new computers, and elementary teachers received new laptops. Most District 2 classrooms are also utilizing Apple TV, which allows for interactive classrooms and iPads.

“iPads are not just a substitute for something we used to do…. We’re looking for apps that provide more higher level thinking and more innovative learning techniques than we had in the past.”

For more on District technology, see the video “Technology: A Powerful Learning Tool” at www.bsd2.org/videoarchive

Getting settled in new schools

The renovation of W.A. Johnson School was completed in the fall and opened to the Mohawk School students and staff after winter break. The renovation makes for a seamless transition between the old building and the new building. Mohawk School students stayed with the same teachers for the remainder of the 2012-13 school year. When school opens August 15, 2013 the school communities will fully combine. The building will be re-dedicated and Mohawk School will be commemorated. Watch for more details in the Bensenville Community News in July/August. A second addition to Tioga School will break ground this month, May, 2013. The first addition to Tioga School was completed in time for the opening of school in August, 2012. The new addition will include one more two-story classroom wing, which mirrors the first two wings, and a cafeteria. When complete in August, 2014, all students will be located in the new school and the old Tioga School will be demolished to make room for a play area and a soccer field. The building plan includes salvaging architectural features from the original Tioga and installing them in the cafeteria and learning gardens, along with some items saved from Chippewa School. Green features at both new schools provide energy savings through daylight harvesting and motion sensors that adjust when the room is vacant and energy-efficient heating, ventilation and air conditioning.

Financial snapshot The $58 million building project at Johnson and Tioga Schools were accomplished without raising property taxes. The District financed $28 million of the project, which is being paid back through existing general revenues. The remainder of the project was funded through the Illinois Capital Development Board grant, local funds and district reserves.

Surveys, feedback help guide decision-making Parent Survey District 2 for many years has surveyed parents to measure their attitudes and opinions about their child’s school and the school district. The 2012 Parent Survey shows: • 94 percent either agreed or strongly agreed that their children are receiving a good education in District 2 schools • 94 percent are pleased with their child’s academic progress • 97 percent say their child feels safe at school • 87 percent say school administrators are accessible, approachable and responsive.

An outstanding student at Blackhawk Middle School, Jacob Hortsman’s love of learning is second nature. He’s involved in student council, and plays trombone for band and jazz band. He’s also a standout on the academic team and math team.

“I like learning and refining my abilities in something I’m not good at,” Jacob said. In looking forward to high school he’s most interested in “trying everything!” he said. Mr. Nick Georgopoulos, Jacob’s academic bowl coach and Language Arts teacher at Blackhawk, said, “Jacob exemplifies the phrase ‘lifelong learner’ and will not only excel as a student in high school, but as a student of life as well.”

Teacher Survey Similarly, teacher surveys are done each year at the end of the school year. The 2012 teacher survey shows: • 93 percent agree or strongly agree that District 2 is a good place to have a career in education • 81 percent say administration makes decisions based upon student needs • 86 percent say their instructional needs are effectively handled • 91 percent say collaboration with teachers is beneficial to the instruction effort.

Community Feedback Responding to the community’s feedback that the history of the old schools be remembered and somehow preserved, artifacts from the Chippewa School were saved when it was demolished in December 2012. The architectural details will be installed in the learning gardens and cafeteria. The Board of Education is also working to determine how to commemorate Mohawk School within W.A. Johnson School.

Superintendent’s message Reshaping education to prepare tomorrow’s leaders There is great change within District 2 and among education in America in general. District 2 is well positioned with targeted resources and a great staff to address the challenge. Our staff has put in a tremendous effort in rewriting curriculum to adapt to the Common Core State Standards -- work that will continue next year and for some time to come. By participating in Race to the Top, District 2 has a seat at the national education reform table in steering both the measure of student achievement and evaluation tools for teachers and principals. This comes at time while our staff and parents have shown strong satisfaction with the educational system in District 2. Next year will bring new challenges as the cut scores on the Illinois Standards Achievement Test are raised. Students will have to perform higher to ‘meet’ and ‘exceed’ state standards. This comes at the same time schools are adapting to the new standards. District 2 staff is working aggressively to adapt to this change. We recognize the classroom today must look much different than the one in which we were educated. Our work is not done, but we are proud of the progress made so far. Annual recap of Bensenville School District 2's progress in adopting the Common Core State Standards and participating in Race to the Top.

Annual recap of Bensenville School District 2's progress in adopting the Common Core State Standards and participating in Race to the Top.