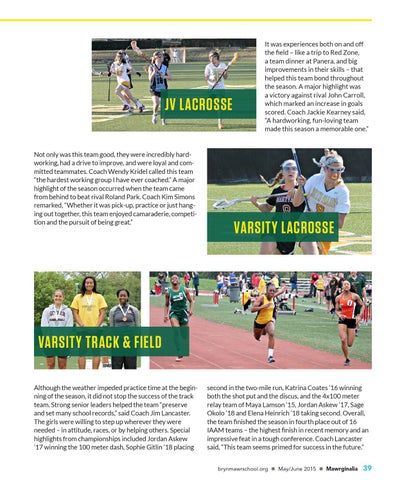 JV LACROSSE Not only was this team good, they were incredibly hardworking, had a drive to improve, and were loyal and committed teammates. Coach Wendy Kridel called this team “the hardest working group I have ever coached.” A major highlight of the season occurred when the team came from behind to beat rival Roland Park. Coach Kim Simons remarked, “Whether it was pick-up, practice or just hanging out together, this team enjoyed camaraderie, competition and the pursuit of being great.”

It was experiences both on and off the field – like a trip to Red Zone, a team dinner at Panera, and big improvements in their skills – that helped this team bond throughout the season. A major highlight was a victory against rival John Carroll, which marked an increase in goals scored. Coach Jackie Kearney said, “A hardworking, fun-loving team made this season a memorable one.”

VARSITY TRACK &amp; FIELD Although the weather impeded practice time at the beginning of the season, it did not stop the success of the track team. Strong senior leaders helped the team “preserve and set many school records,” said Coach Jim Lancaster. The girls were willing to step up wherever they were needed – in attitude, races, or by helping others. Special highlights from championships included Jordan Askew ’17 winning the 100 meter dash, Sophie Gitlin ’18 placing

second in the two-mile run, Katrina Coates ’16 winning both the shot put and the discus, and the 4x100 meter relay team of Maya Lamson ’15, Jordan Askew ’17, Sage Okolo ’18 and Elena Heinrich ’18 taking second. Overall, the team finished the season in fourth place out of 16 IAAM teams – the highest finish in recent memory and an impressive feat in a tough conference. Coach Lancaster said, “This team seems primed for success in the future.” brynmawrschool.org 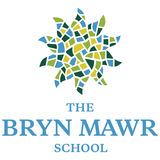