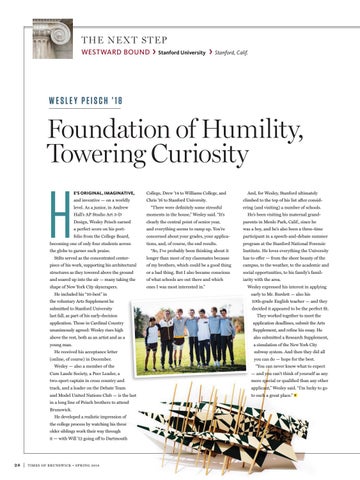 College, Drew ’14 to Williams College, and

and inventive — on a worldly

level. As a junior, in Andrew

ering (and visiting) a number of schools.

parents in Menlo Park, Calif., since he

a perfect score on his port-

and everything seems to ramp up. You’re

was a boy, and he’s also been a three-time

folio from the College Board,

concerned about your grades, your applica-

participant in a speech-and-debate summer

tions, and, of course, the end results.

program at the Stanford National Forensic

becoming one of only four students across the globe to garner such praise.

“So, I’ve probably been thinking about it

He’s been visiting his maternal grand-

Institute. He loves everything the University

Stilts served as the concentrated center-

longer than most of my classmates because

has to offer — from the sheer beauty of the

piece of his work, supporting his architectural

of my brothers, which could be a good thing

campus, to the weather, to the academic and

structures as they towered above the ground

or a bad thing. But I also became conscious

social opportunities, to his family’s famil-

and soared up into the air — many taking the

of what schools are out there and which

Wesley expressed his interest in applying early to Mr. Burdett — also his

the voluntary Arts Supplement he

10th-grade English teacher — and they

decided it appeared to be the perfect fit.

last fall, as part of his early-decision

They worked together to meet the

application. Those in Cardinal Country

Supplement, and refine his essay. He

above the rest, both as an artist and as a

a simulation of the New York City

He received his acceptance letter (online, of course) in December.

subway system. And then they did all you can do — hope for the best.

Wesley — also a member of the

“You can never know what to expect

— and you can’t think of yourself as any

two-sport captain in cross country and

more special or qualified than any other

track, and a leader on the Debate Team

and Model United Nations Club — is the last

to such a great place.”

in a long line of Peisch brothers to attend Brunswick. He developed a realistic impression of the college process by watching his three older siblings work their way through it — with Will ’12 going off to Dartmouth

“There were definitely some stressful

And, for Wesley, Stanford ultimately climbed to the top of his list after consid-