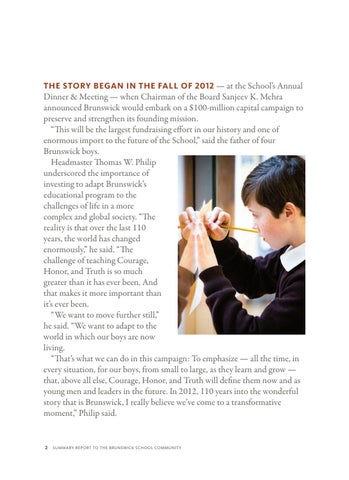 Dinner & Meeting — when Chairman of the Board Sanjeev K. Mehra announced Brunswick would embark on a $100-million capital campaign to preserve and strengthen its founding mission. “This will be the largest fundraising effort in our history and one of enormous import to the future of the School,” said the father of four Brunswick boys. Headmaster Thomas W. Philip underscored the importance of investing to adapt Brunswick’s educational program to the challenges of life in a more complex and global society. “The reality is that over the last 110 years, the world has changed enormously,” he said. “The challenge of teaching Courage, Honor, and Truth is so much greater than it has ever been. And that makes it more important than it’s ever been. “We want to move further still,” he said. “We want to adapt to the world in which our boys are now living. “That’s what we can do in this campaign: To emphasize — all the time, in every situation, for our boys, from small to large, as they learn and grow — that, above all else, Courage, Honor, and Truth will define them now and as young men and leaders in the future. In 2012, 110 years into the wonderful story that is Brunswick, I really believe we’ve come to a transformative moment,” Philip said.