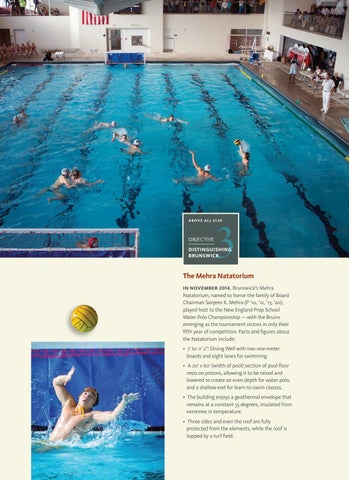 The Mehra Natatorium IN NOVEMBER 2014 , Brunswick’s Mehra Natatorium, named to honor the family of Board Chairman Sanjeev K. Mehra (P ’10, ’12, ’13, ’20), played host to the New England Prep School Water Polo Championship — with the Bruins emerging as the tournament victors in only their fifth year of competition. Facts and figures about the Natatorium include:

•  7' to 11' 2": Diving Well with two one-meter boards and eight lanes for swimming •  A 20' x 60' (width of pool) section of pool floor rests on pistons, allowing it to be raised and lowered to create an even depth for water polo, and a shallow end for learn-to-swim classes. •  The building enjoys a geothermal envelope that remains at a constant 55 degrees, insulated from extremes in temperature. •  Three sides and even the roof are fully protected from the elements, while the roof is topped by a turf field. 20  SUMMARY REPORT TO THE BRUNSWICK SCHOOL COMMUNITY