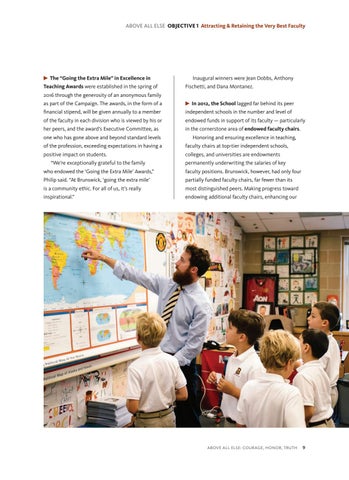 ABOVE ALL ELSE OBJECTIVE 1 Attracting & Retaining the Very Best Faculty

▶▶ The “Going the Extra Mile” in Excellence in

Teaching Awards were established in the spring of

2016 through the generosity of an anonymous family as part of the Campaign. The awards, in the form of a

financial stipend, will be given annually to a member

independent schools in the number and level of

endowed funds in support of its faculty — particularly

her peers, and the award’s Executive Committee, as

in the cornerstone area of endowed faculty chairs.

one who has gone above and beyond standard levels

Honoring and ensuring excellence in teaching,

of the profession, exceeding expectations in having a

colleges, and universities are endowments

“We’re exceptionally grateful to the family

permanently underwriting the salaries of key

who endowed the ‘Going the Extra Mile’ Awards,”

faculty positions. Brunswick, however, had only four

is a community ethic. For all of us, it’s really

most distinguished peers. Making progress toward

ABOVE ALL ELSE: COURAGE, HONOR, TRUTH   9