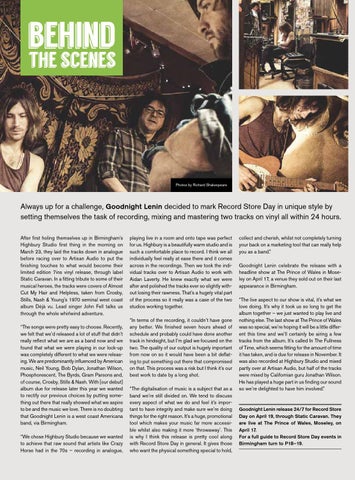 Always up for a challenge, Goodnight Lenin decided to mark Record Store Day in unique style by setting themselves the task of recording, mixing and mastering two tracks on vinyl all within 24 hours. After first holing themselves up in Birmingham’s Highbury Studio first thing in the morning on March 23, they laid the tracks down in analogue before racing over to Artisan Audio to put the finishing touches to what would become their limited edition 7ins vinyl release, through label Static Caravan. In a fitting tribute to some of their musical heroes, the tracks were covers of Almost Cut My Hair and Helpless, taken from Crosby, Stills, Nash & Young’s 1970 seminal west coast album Déjà vu. Lead singer John Fell talks us through the whole whirlwind adventure. “The songs were pretty easy to choose. Recently, we felt that we’d released a lot of stuff that didn’t really reflect what we are as a band now and we found that what we were playing in our lock-up was completely different to what we were releasing. We are predominantly influenced by American music, Neil Young, Bob Dylan, Jonathan Wilson, Phosphorescent, The Byrds, Gram Parsons and, of course, Crosby, Stills & Nash. With [our debut] album due for release later this year we wanted to rectify our previous choices by putting something out there that really showed what we aspire to be and the music we love. There is no doubting that Goodnight Lenin is a west coast Americana band, via Birmingham. “We chose Highbury Studio because we wanted to achieve that raw sound that artists like Crazy Horse had in the 70s – recording in analogue, 8

playing live in a room and onto tape was perfect for us. Highbury is a beautifully warm studio and is such a comfortable place to record. I think we all individually feel really at ease there and it comes across in the recordings. Then we took the individual tracks over to Artisan Audio to work with Aidan Laverty. He knew exactly what we were after and polished the tracks ever so slightly without losing their rawness. That’s a hugely vital part of the process so it really was a case of the two studios working together. “In terms of the recording, it couldn’t have gone any better. We finished seven hours ahead of schedule and probably could have done another track in hindsight, but I’m glad we focused on the two. The quality of our output is hugely important from now on so it would have been a bit deflating to put something out there that compromised on that. This process was a risk but I think it’s our best work to date by a long shot. “The digitalisation of music is a subject that as a band we’re still divided on. We tend to discuss every aspect of what we do and feel it’s important to have integrity and make sure we’re doing things for the right reason. It’s a huge, promotional tool which makes your music far more accessible whilst also making it more ‘throwaway’. This is why I think this release is pretty cool along with Record Store Day in general. It gives those who want the physical something special to hold,

collect and cherish, whilst not completely turning your back on a marketing tool that can really help you as a band.” Goodnight Lenin celebrate the release with a headline show at The Prince of Wales in Moseley on April 17, a venue they sold out on their last appearance in Birmingham. “The live aspect to our show is vital, it’s what we love doing. It’s why it took us so long to get the album together – we just wanted to play live and nothing else. The last show at The Prince of Wales was so special, we’re hoping it will be a little different this time and we’ll certainly be airing a few tracks from the album. It’s called In The Fullness of Time, which seems fitting for the amount of time it has taken, and is due for release in November. It was also recorded at Highbury Studio and mixed partly over at Artisan Audio, but half of the tracks were mixed by Californian guru Jonathan Wilson. He has played a huge part in us finding our sound so we’re delighted to have him involved.” 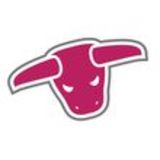