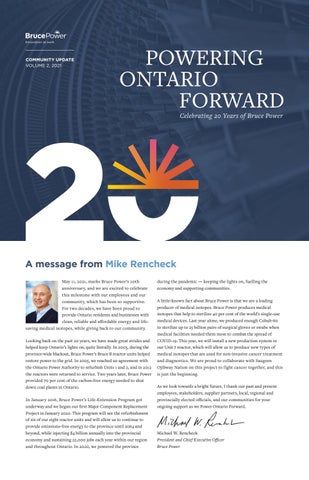 A message from Mike Rencheck May 11, 2021, marks Bruce Power’s 20th anniversary, and we are excited to celebrate this milestone with our employees and our community, which has been so supportive. For two decades, we have been proud to provide Ontario residents and businesses with clean, reliable and affordable energy and lifesaving medical isotopes, while giving back to our community. Looking back on the past 20 years, we have made great strides and helped keep Ontario’s lights on, quite literally. In 2003, during the province-wide blackout, Bruce Power’s Bruce B reactor units helped restore power to the grid. In 2005, we reached an agreement with the Ontario Power Authority to refurbish Units 1 and 2, and in 2012 the reactors were returned to service. Two years later, Bruce Power provided 70 per cent of the carbon-free energy needed to shut down coal plants in Ontario. In January 2016, Bruce Power’s Life-Extension Program got underway and we began our first Major Component Replacement Project in January 2020. This program will see the refurbishment of six of our eight reactor units and will allow us to continue to provide emissions-free energy to the province until 2064 and beyond, while injecting $4 billion annually into the provincial economy and sustaining 22,000 jobs each year within our region and throughout Ontario. In 2020, we powered the province

during the pandemic — keeping the lights on, fuelling the economy and supporting communities. A little-known fact about Bruce Power is that we are a leading producer of medical isotopes. Bruce Power produces medical isotopes that help to sterilize 40 per cent of the world&#39;s single-use medical devices. Last year alone, we produced enough Cobalt-60 to sterilize up to 25 billion pairs of surgical gloves or swabs when medical facilities needed them most to combat the spread of COVID-19. This year, we will install a new production system in our Unit 7 reactor, which will allow us to produce new types of medical isotopes that are used for non-invasive cancer treatment and diagnostics. We are proud to collaborate with Saugeen Ojibway Nation on this project to fight cancer together, and this is just the beginning. As we look towards a bright future, I thank our past and present employees, stakeholders, supplier partners, local, regional and provincially elected officials, and our communities for your ongoing support as we Power Ontario Forward.

Our path to securing tomorrow We&#39;ve packed a lot into 20 years —

from Restart through to our recent

After British Energy leases the site from Ontario Power Generation in 2000, Bruce Power is formed and assumes operational control of site, confirming plans to restart Units 3 and 4.

Life-Extension Program, and everything in between. Here&#39;s a look back at two decades of Bruce Power.

2012 Units 1 and 2 return to service and life-extension work is completed in Units 3 and 4.

A proud past and a bright future WHERE WE STARTED Becoming Bruce Power In 2001, Bruce Power became Canada’s first private nuclear operator. Over the next 11 years, we worked to restart Units 1-4, adding a boost to the grid while breathing new life into the region. The lifespan of the eight-unit site jumped from 2018 to 2035, guaranteeing another generation of nuclear jobs in the area.

WHERE WE’RE AT Powering Ontario Forward When the long-term agreement with the Independent Electricity System Operator (IESO) was signed on Dec. 3, 2015, it signified the next phase of Bruce Power’s development. Now, more than one year into our first Major Component Replacement Project, we&#39;re helping advance economic recovery in the province with our ‘Made-inOntario’ approach to jobs and investment. Together with our unions, suppliers and tradespeople, we are well on our way to powering Ontario for at least another 40 years.

2013 For the first time in almost two decades, all eight units on the Bruce site provide electricity to Ontario’s grid, producing 30 per cent of the province’s power and more than half of its nuclear power.

Bruce Power provides 70 per cent of the clean energy needed in Ontario to phase out the province’s coal-powered generation. 3/24/2021

* Bruce Power signs a long-term agreement with the province to refurbish Units 3-8, extending the life of the site to 2064. For the third consecutive year, the company sets a site production record, generating over 47 terrawatt hours of carbon-free electricity.

Millions of dollars of contracts are awarded for the Unit 6 Major Component Replacement Project, to begin in 2020. Bruce Power’s Life-Extension Program will invest $4 billion into Ontario’s economy annually, creating and sustaining an estimated 22,000 jobs each year.

2021 Bruce Power marks the successful first year of the MCR Project while supporting the fight against COVID-19. The company works with the Grey Bruce Health Unit, and others across Ontario, to coordinate regional mass vaccination hubs.

“Bruce Power’s success in its first 20 years is a testament to the spirit of its people who have demonstrated resilience and dedication through some turbulent and triumphant times. I always believed that we had a bright future as a company, and I am proud of what we’ve accomplished and look forward to seeing what the next chapter holds in store.” Duncan Hawthorne, President and CEO, Bruce Power, 2001-2016

WHERE WE’RE GOING The Future of Nuclear Over the next 12 years, we will refurbish six units through our Life-Extension Program, infusing 30 years of additional life into our reactors and allowing for continued production of life-saving medical isotopes. Bruce Power is also committed to a cleaner energy future. Our goal of achieving zero greenhouse gas emissions by 2027 will help contribute to a net-zero Canada by 2050 while also growing the economy and fostering innovation. And we’re just getting started.

TWO DECADES OF COMMUNITY PARTNERSHIP Bruce Power owes much of its success to the support and commitment from our surrounding communities, so thank you. We have had the privilege to give back in a number of ways over the years, and we are proud to support the great work that is being done to improve lives, protect the environment, celebrate culture, encourage education and build healthy communities in Bruce, Grey and Huron counties.

Celebrate with us and win! Join our 20th Anniversary Scavenger Hunt during the month of May

Since we can’t get together to celebrate in the community

3. A beach in Bruce, Grey or Huron County

this year, we would like for you and your family to join us on

5. A water tower in your community

From May 11-31, safely explore your community, snap some photos of the prompts and post them to Instagram (don’t forget to tag @brucepowerngs) or email them to contest@brucepower.com for a chance to win.

2. An initiative in your community that Bruce Power supported

6. A selfie with your town population sign 7. A local bridge 8. A photo from 20 years ago 9. A creative 20th anniversary message to Bruce Power 10. A meal from a local restaurant (and tag them) 11. The Bruce Power logo on something in your community 12. Your favourite local business (and tag them) 13. Your family enjoying the outdoors

CONTEST RULES Contest runs from May 11-31. Follow and tag @brucepowerngs on Instagram by May 31 to be entered into the random draw for $20,000 in prizes, including 20 grand prizes of a $500 Yeti cooler package. Emails can be sent to contest@brucepower.com. Please include your street address and phone number. If your Instagram account is set to private, you must follow @brucepowerngs and direct message us your photos to be entered. Enter as many times as you like by completing the different challenges in your community (one entry per completed challenge, not photo). Only winners will be contacted for their mailing information. Prizes will be sent out the second week in June via courier. Must be a resident of Ontario. Remember, you can enter by following and tagging @brucepowerngs on Instagram or emailing us a contest@brucepower.com.

For more information, contact us: Bruce Power Visitors’ Centre Tiverton, ON info@brucepower.com www.brucepower.com Sign up for our e-newsletter to keep updated. Find the sign-up form on the Bruce Power homepage.

14. A business sign of a Bruce Power supplier 15. Your favourite place to go for ice cream 16. A sunset 17. Your favourite country landscape 18. Any Bruce Power-sponsored event from 2001-21 19. A family member or friend who works at Bruce Power (tag them and #theirdepartment) 20. Indigenous art or a local artist’s work

May 11, 2021, marks Bruce Power’s 20th anniversary, and we are excited to celebrate this milestone with our employees and our community, which has been so supportive. 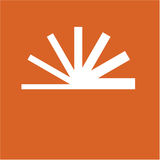