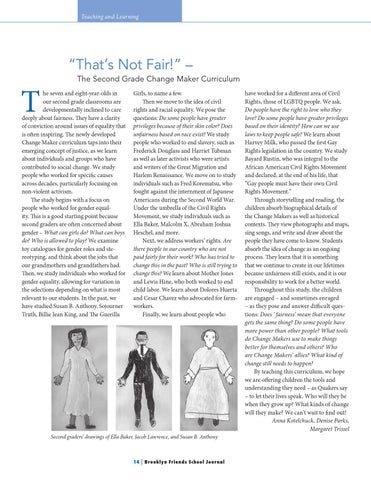 he seven and eight-year-olds in our second grade classrooms are developmentally inclined to care deeply about fairness. They have a clarity of conviction around issues of equality that is often inspiring. The newly developed Change Maker curriculum taps into their emerging concept of justice, as we learn about individuals and groups who have contributed to social change. We study people who worked for specific causes across decades, particularly focusing on non-violent activism. The study begins with a focus on people who worked for gender equality. This is a good starting point because second graders are often concerned about gender – What can girls do? What can boys do? Who is allowed to play? We examine toy catalogues for gender roles and stereotyping, and think about the jobs that our grandmothers and grandfathers had. Then, we study individuals who worked for gender equality, allowing for variation in the selections depending on what is most relevant to our students. In the past, we have studied Susan B. Anthony, Sojourner Truth, Billie Jean King, and The Guerilla

Girls, to name a few. Then we move to the idea of civil rights and racial equality. We pose the questions: Do some people have greater privileges because of their skin color? Does unfairness based on race exist? We study people who worked to end slavery, such as Frederick Douglass and Harriet Tubman as well as later activists who were artists and writers of the Great Migration and Harlem Renaissance. We move on to study individuals such as Fred Korematsu, who fought against the internment of Japanese Americans during the Second World War. Under the umbrella of the Civil Rights Movement, we study individuals such as Ella Baker, Malcolm X, Abraham Joshua Heschel, and more. Next, we address workers’ rights. Are there people in our country who are not paid fairly for their work? Who has tried to change this in the past? Who is still trying to change this? We learn about Mother Jones and Lewis Hine, who both worked to end child labor. We learn about Dolores Huerta and Cesar Chavez who advocated for farmworkers. Finally, we learn about people who

have worked for a different area of Civil Rights, those of LGBTQ people. We ask, Do people have the right to love who they love? Do some people have greater privileges based on their identity? How can we use laws to keep people safe? We learn about Harvey Milk, who passed the first Gay Rights legislation in the country. We study Bayard Rustin, who was integral to the African American Civil Rights Movement and declared, at the end of his life, that “Gay people must have their own Civil Rights Movement.” Through storytelling and reading, the children absorb biographical details of the Change Makers as well as historical contexts. They view photographs and maps, sing songs, and write and draw about the people they have come to know. Students absorb the idea of change as an ongoing process. They learn that it is something that we continue to create in our lifetimes because unfairness still exists, and it is our responsibility to work for a better world. Throughout this study, the children are engaged – and sometimes enraged – as they pose and answer difficult questions: Does ‘ fairness’ mean that everyone gets the same thing? Do some people have more power than other people? What tools do Change Makers use to make things better for themselves and others? Who are Change Makers’ allies? What kind of change still needs to happen? By teaching this curriculum, we hope we are offering children the tools and understanding they need – as Quakers say – to let their lives speak. Who will they be when they grow up? What kinds of change will they make? We can’t wait to find out! Anna Kotelchuck, Denise Parks, Margaret Trissel