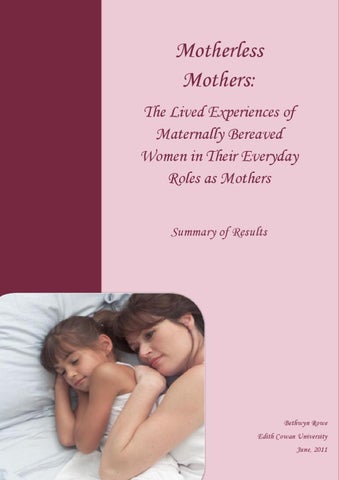 Motherless Mothers: The Lived Experiences of Maternally Bereaved Women in Their Everyday Roles as Mothers Summary of Results

“I would like to extend a special thank you to the ten wonderful women who voluntarily participated in this study, and gave up their time to talk to me about their experiences of mother loss and motherless motherhood”

Overview Motherless mothers are women who lose their mothers to death prior to having their children, and therefore raise their children without the maternal support and guidance afforded to many women whose mothers are still alive. Little research exists that has examined the influence of premature mother loss on a daughter’s mother role, therefore this study aimed to address this gap. Specifically, this study explored how the death of a daughter’s mother prior to her having her children, influences her everyday lived experience of the mother role.

Participants This study utilised a qualitative approach, and involved face-to-face interviews with 10 motherless mothers. Participants were recruited via flyers placed on noticeboards at Child Health Clinics and playgroups in the northern suburbs of Perth, Western Australia; through an article published in a northern suburbs community newspaper, and also word of mouth. To be included in the study, the women were required to have been maternally bereaved prior to the conception of their eldest child, and their eldest child was to be aged ten years or less. Participants ranged in age from 34 to 45 years, had between one and four children each, and all were partnered or married.

Results Four major themes emerged from the data that reflected the experiences faced by participants in their everyday lives as motherless mothers. These were: Grief

everyday questions of their mothers was a notable component of their everyday motherless mother role. Changes to Self Following Mother Loss The final key component of the motherless mother experience highlighted by this study was in relation to the impact of mother loss on daughters’ personal identities. Specifically, many of the motherless mothers described how the loss of their primary caregiver had resulted in them having to ‘grow up’ virtually overnight, and how their experience of major loss had increased their awareness of mortality. In line with literature relating to posttraumatic growth, the majority of motherless mothers also identified positive personal changes that had occurred as a result of their loss, specifically increased emotional strength and a reassessment of personal values.

Summary Statement Collectively, the findings of this study provide insight into the ongoing influence a mother’s death can have on a daughter’s life and draw distinction to specific issues faced by motherless daughters when they have children of their own. Results will be beneficial both in increasing general awareness of the issues faced by motherless women in their mother roles, and in professional settings as a guide for clinicians and others working with women who have experienced premature mother loss and are entering or experiencing motherhood.

Researcher Details The examination of the lived experiences of motherless mothers was conducted in 2010 by Bethwyn Rowe as partial fulfilment of the award of Bachelor of Psychology (Honours) at Edith Cowan University. For more information relating to this study, Bethwyn can be emailed at blrowe@our.ecu.edu.au or contacted directly on 0419 904 896.

A qualitative study of mothers who are themselves motherless. 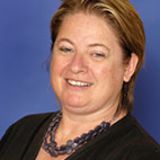