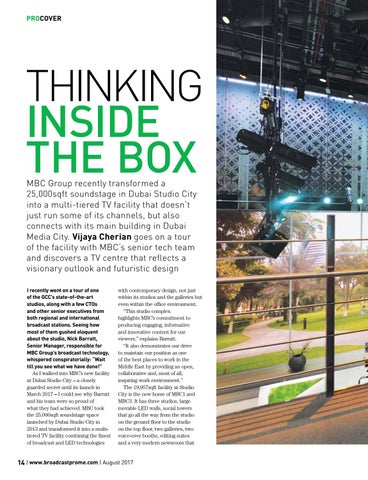 THINKING inside THe BOX MBC Group recently transformed a 25,000sqft soundstage in Dubai Studio City into a multi-tiered TV facility that doesn’t just run some of its channels, but also connects with its main building in Dubai Media City. Vijaya Cherian goes on a tour of the facility with MBC’s senior tech team and discovers a TV centre that reflects a visionary outlook and futuristic design I recently went on a tour of one of the GCC’s state-of-the-art studios, along with a few CTOs and other senior executives from both regional and international broadcast stations. Seeing how most of them gushed eloquent about the studio, Nick Barratt, Senior Manager, responsible for MBC Group’s broadcast technology, whispered conspiratorially: “Wait till you see what we have done!” As I walked into MBC’s new facility at Dubai Studio City – a closely guarded secret until its launch in March 2017 – I could see why Barratt and his team were so proud of what they had achieved. MBC took the 25,000sqft soundstage space launched by Dubai Studio City in 2013 and transformed it into a multitiered TV facility combining the finest of broadcast and LED technologies

with contemporary design, not just within its studios and the galleries but even within the office environment. “This studio complex highlights MBC’s commitment to producing engaging, informative and innovative content for our viewers,” explains Barratt. “It also demonstrates our drive to maintain our position as one of the best places to work in the Middle East by providing an open, collaborative and, most of all, inspiring work environment.” The 19,957sqft facility at Studio City is the new home of MBC1 and MBC3. It has three studios, large movable LED walls, social towers that go all the way from the studio on the ground floor to the studio on the top floor, two galleries, two voice-over booths, editing suites and a very modern newsroom that 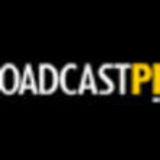