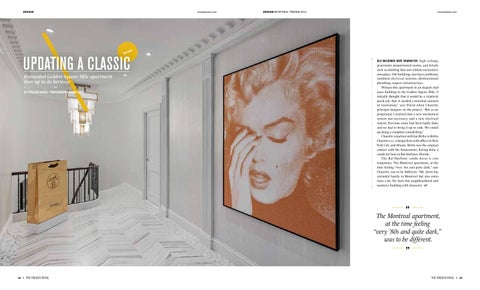 Old buildings have character: high ceilings, generously proportioned rooms, and details such as molding that one seldom encounters nowadays. Old buildings also have problems: outdated electrical systems, dysfunctional plumbing, suspect infrastructure. Witness this apartment in an elegant mid1920s building in the Golden Square Mile. “I initially thought that it would be a relatively quick job, that it needed a minimal amount of renovation,” says David Allan Charette, principal designer on the project. “But as we progressed, I realized that a new mechanical system was necessary, and a new electrical system. Previous renos had been badly done, and we had to bring it up to code. We ended up doing a complete remodelling.” Charette is partner with Jay Britto in Britto Charette llc, a design firm with offices in New York City and Miami. Britto was the original contact with the homeowner, having done a condo for him in Bal Harbour, Florida. The Bal Harbour condo decor is contemporary. The Montreal apartment, at the time feeling “very ’80s and quite dark,” says Charette, was to be different. “My client has extended family in Montreal but also entertains a lot. He loves this neighbourhood and wanted a building with character. •

The Montreal apartment, at the time feeling “very ’80s and quite dark,” was to be different. 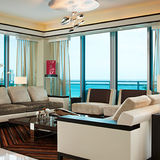 Renovated Golden Square Mile apartment lives up to its heritage.

Renovated Golden Square Mile apartment lives up to its heritage.