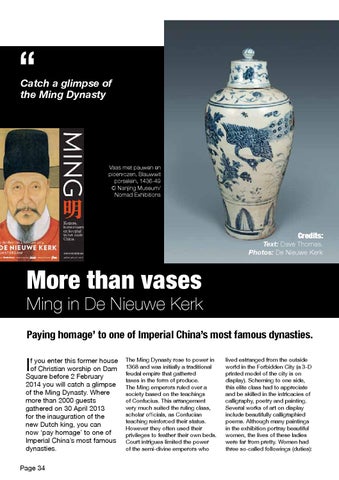 Catch a glimpse of the Ming Dynasty

Ming in De Nieuwe Kerk Paying homage’ to one of Imperial China’s most famous dynasties.

f you enter this former house of Christian worship on Dam Square before 2 February 2014 you will catch a glimpse of the Ming Dynasty. Where more than 2000 guests gathered on 30 April 2013 for the inauguration of the new Dutch king, you can now ‘pay homage’ to one of Imperial China’s most famous dynasties.

The Ming Dynasty rose to power in 1368 and was initially a traditional feudal empire that gathered taxes in the form of produce. The Ming emperors ruled over a society based on the teachings of Confucius. This arrangement very much suited the ruling class, scholar officials, as Confucian teaching reinforced their status. However they often used their privileges to feather their own beds. Court intrigues limited the power of the semi-divine emperors who

lived estranged from the outside world in the Forbidden City (a 3-D printed model of the city is on display). Scheming to one side, this elite class had to appreciate and be skilled in the intricacies of calligraphy, poetry and painting. Several works of art on display include beautifully calligraphied poems. Although many paintings in the exhibition portray beautiful women, the lives of these ladies were far from pretty. Women had three so-called followings (duties):

The monthly magazine from the British Society of Amsterdam 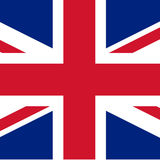