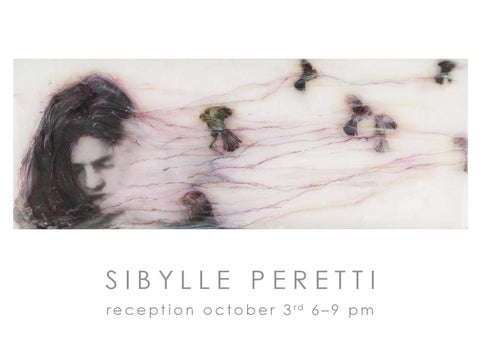 THE UNUSUAL KIND German-born artist Sibylle Peretti conjures visions of childhood and childhood lost. In Peretti’s works, children are often grouped in pairs, conversing wordlessly with one another or with birds, water, or flowers, as if immersed in a mystical union with nature. Her ethereal imagery and haunting thematic subtexts captivate the viewer’s imagination. Peretti’s exhibition at Gallery Bienvenu features porcelain sculptures and mixed-media works on panel, which incorporate myriad layers of paper, oil paint, and watercolor on either side of Plexiglas panels. Her unique techniques impart a texture that complements the works’ conceptual nuance. Collectors and museum curators around the world have responded to Peretti’s vision, which hovers between fairy tale, dream, and historic fact. The current series was inspired by a growing fascination with children raised with little or no exposure to human beings. With their immaculate innocence, such children have intrigued storytellers and researchers for ages—from Romulus and Remus, the legendary founders of Rome, who are said to have been nursed by a wolf—to Victor of Aveyron, made famous by Truffault’s film, The Wild Child—to Genie, a feral child whose discovery made headlines in the 1970s. These children live “in a kind of private, untouchable world,” the artist says, in which their “honesty and purity opens doors of fantasies and dreams.” With Peretti’s imagery as a springboard, viewers may project themselves into the children’s archaic, pre-verbal world. The works reconnect us to dormant memories or emotions, inducing free associations that encourage the mind to skim and skip where rationality alone could not lead. It is this freeing of the imagination, coupled with the rigors she lavishes on composition and surface, that so eloquently distinguishes her work. “I want to start people thinking and becoming more open and curious,” she remarks. “The children in my work impart a mystery around them... I think they may carry answers to our big questions, such as what makes us human.”