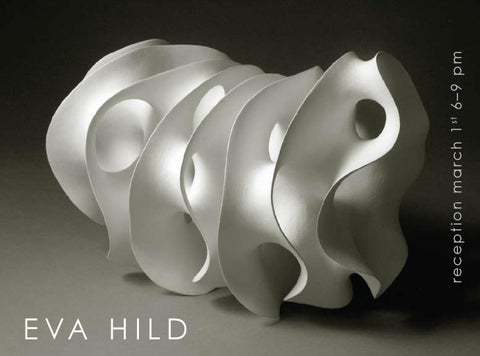 Intricate, mysterious, and sensual, the sculptures of Swedish artist Eva Hild challenge us to ponder their integration of assertiveness and delicacy, presence and absence. Recently lauded in The New York Times (“astonishing sculptures,” declared critic Roberta Smith, “...a new star in the ceramics firmament.”), Hild creates iconic visual sonatas whose pristine white surfaces harken to sleek, 1960s modernism, even as their supple undulations and pregnant voids suggest the organicism of coral and sea sponges. During the course of an improvisatory, intensely physical process, the artist uses her hands and metal tools to shape, sand, and fire stoneware clay into looping, twisting, bowing forms that flex and release, vault and retract. The physicality of the approach reflects the artist’s personal biography (she worked as a physical therapist before becoming a full-time artist) as well as her strong thematic interest in “external and internal pressures, strain, flow, and influence.” Indeed, the finished works often evoke the beauty and inscrutability of human anatomy: the curve of hips, the nautilus-like spirals of the cochlea, the cozy smoothness of the womb. A graduate of Göteborg University’s School of Design and Crafts, Hild has exhibited widely and is represented in important private and institutional collections. For all the eye-pleasing curves and contours in her work, the pieces also harbor a psychological complexity born of the dance between public and private persona. They also possess a thoughtful strain of sexual electricity and dualism that recall Dutch sculptor Herman Makkink’s Rocking Machine and American painter Georgia O’Keeffe’s intimate florals and blanched-out cow pelvises, which presage the nubs and hollows of Hild’s works. Within their immaculate formal parameters, the sculptures are delightfully inventive: some sharp and intricate, some origami-like; others as bulbous and welcoming as a Pierre Paulin armchair; all of them expressive of the paradox of strength and fragility that is the human soul.