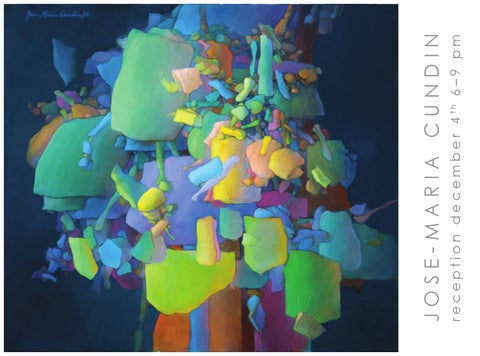 TWELVE ANTI-PORTRAITS Conceptual sophistication, exuberant color, and a sense of visual wit distinguish the paintings of world-renowned artist José-Maria Cundin. In his exhibition at Gallery Bienvenu, Twelve Anti-Portraits, Cundin deconstructs traditional notions of portraiture and perception. “These are orderly depictions of some extraordinary entities,” he explains. “My intent is to cover all aspects of portraiture—imagery, demeanor, drama, and others—in the most subjective way possible.” While some of these icons are based on actual people from the artist’s life, others are purely imagined. All of the works share a commonality with what the artist calls “a certain Spanish constant, which could be the ‘antiportrait,’” as seen in masterpieces by painters such as Diego Velázquez, Francisco Goya, and many others. Born in the Basque Country in 1938, the artist moved to Bogotá, Colombia, in his teens. In 1958 he began living and making art in New York City. Six years later he arrived in New Orleans, a city whose vibrant mélange of fatalism and resiliency resonated with his Basque heritage. Cundin has remained in Louisiana, creating artwork that is exhibited internationally and figures prominently in some of the top collections and museums across Europe and the Americas. The whimsical quality in Cundin’s work springs from his own playful spirit. Asked if he is influenced by the great artists of the past, he cites Ignacio Zuloaga, Julio Romero de Torres, Juan de Valdés Leal, and a host of others, but wryly adds: “In addition to great artists, I am also influenced by great thinkers, carpenters, fishermen, shepherds, and mechanics.” This sense of mischief enlivens his paintings’ inquiry into the components of depiction and self-perception. In the anti-portraits, tags and tatters of color coalesce around an unseen magnetic core, suggesting a kind of zerogravity sculpture. With their jittery kineticism, the flecks of color adhere to one another in a fashion akin to the way human personality adheres to a central self-concept. While he acknowledges that artists have an imprecise control over viewers’ responses, he acknowledges that he “would be very pleased should my audience think and feel that my work satisfies their aesthetic expectations—and even more if it triggers in them a certain magical mechanism of well-being.”