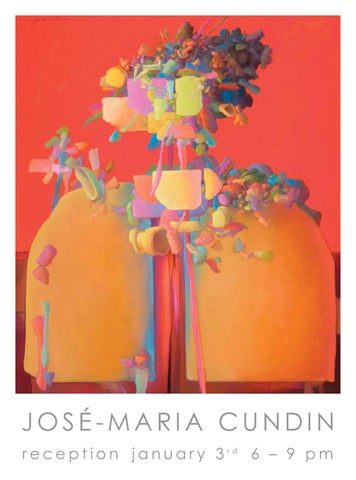 FOLSOM BLUES, REDS AND YELLOWS (Portraits, Self-Portraits, Anti-Portraits and Pseudo-Portraits) José-Maria Cundin’s paintings stand at the crossroads of potent conceptual investigation—the “morals, meanings, and metaphors” he is perpetually in search of—and an impish sense of whimsy and delight. A master of wild, counterintuitive color, he simultaneously challenges and amuses the viewer through extravagantly hued semi-abstract imagery, which appears both biomorphic and constructed, like inscrutable Rube Goldberg devices comprised of organic parts. Born in the Basque Country in 1938, Cundin soon became a citizen of the world—yet he never lost the spirit, soulfulness, and tragic romanticism of his homeland. Being Basque, he says, “means that I see and face life as a mysterious and ancient existential commitment.” As a budding young artist he was influenced by historical Basque painters such as Ignacio Zuloaga and the Zubiaurre brothers, and as well as Spanish painters including Francisco Goya and Juan de Valdés Leal. In the 1950s he lived and exhibited in Bogotá, Colombia, moving in 1958 to New York City, then at the zenith of a long artistic flowering. In 1964 Cundin arrived in New Orleans, a city whose color and character matched his own, and he remains in Louisiana to this day, creating work in his Folsom studio that is exhibited internationally and is prized in prestigious collections and museums across Europe and the Americas. A rich distillation of the historical and biographical essence of the artist himself, the current body of work offers a thoughtful, exuberant deconstruction of “portraits, self-portraits, anti-portraits, and pseudo-portraits.” The particular brilliance of these paintings lies in the invention and abandon with which they toy with notions of objectivity and subjectivity, perception, distortion, and expectation. Obliquely, they evoke and update the absurdist wit of Renaissance portraitist Giuseppe Arcimboldo, with a buoyant pictorial intelligence and precision that never veer into didacticism. “I believe,” Cundin says, “in the importance of the premise that art should entertain. Without this quality, art remains distant and emotionally inaccessible.” With an elegance that belies their compositional and thematic complexity, these paintings engage the viewer’s imagination, provoke introspection, and dazzle the eye. RICHARD SPEER