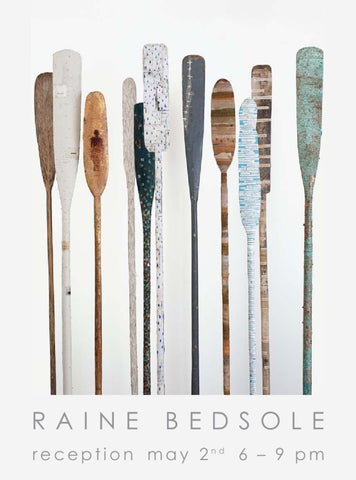 RAINE BEDSOLE Recent Work Evocative, haunting, and serene, Raine Bedsole’s assemblages, paintings, and sculptures whisper in the timeless language of mythology and symbolism. With their imagery of boats, oars, and the human figure, her newest works are based in part on Homer’s epic, The Odyssey, the story of a hero’s long voyage home after the Trojan War. Bedsole sees this classic text as a metaphor for New Orleanians’ journey back to normalcy in the aftermath of Hurricane Katrina. “I think it is a universal longing to return to wherever home is,” she remarks. “After Katrina, it was as if we were blown to the seven winds, and ever since then we’ve been trying, like Odysseus searching for the way back to Ithaca, to find our own ways back home.” A graduate of Auburn University and the San Francisco Art Institute, Bedsole paints and sculpts in her studio in the French Quarter. She has been active in the New Orleans art scene since the early 1990s. Her work has been exhibited and collected throughout North America, Europe, Asia, and the Middle East. Honored with a grant from the Joan Mitchell Foundation, she was also a prize-winner in the 2001 Florence Biennale. The nautical imagery that informs the artist’s work harkens to the Egyptian barques that carried pharoahs into the afterlife; the poignancy and romance of Norse longboats and Native American canoes; and the symbolism of the life raft, rescuing us from harm, delivering us to safety. The notches and grooves in Bedsole’s oar sculptures weave mysterious narratives about the hands that rowed them—their individual histories mixing with the artist’s experience in intricate layers of paint, texture, fabric, found paper, and poetry. Other sculptures incorporate richly patinaed copper— alluding to treasures raised from ancient shipwrecks—and gold leaf, glinting like the play of sunlight on waves. The vessels imply water but float on air, inviting the viewer to fill the space around them with the currents and undercurrents of their own lives. Visually and metaphorically elegant, they are vehicles for inner navigation, challenging the mind even as they soothe the soul.